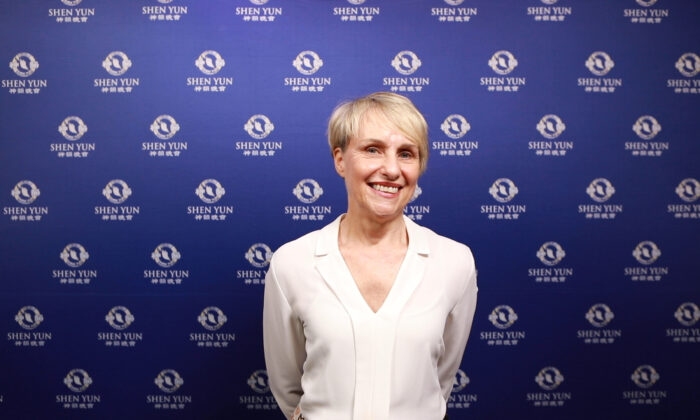 SYDNEY—The efforts of the world-renowned Shen Yun Performing Arts dancers had not gone unnoticed when Maxine Kohler, the principal of The McDonald College that specializes in the performing arts, caught the opening night performance in Sydney, Australia on March 4, 2020.

“I’m just in awe of the performers’ precision and athleticism and the way they work together as a team, so it’s obviously a great compliment to those that trained them,” Kohler said. “The dancers performed with every part of their body, from their eyes right through to their fingertips.”

But this isn’t the first time Kohler watched the New-York based company perform; she previously saw it back in 2007 and this year she saw a brand new performance at the Capitol Theatre in Sydney.

The New-York based company was established in 2006 and has been performing around the world ever since. Together, the dancers, singers, and musicians all share one vision—to revive 5,000 years of traditional Chinese culture.

The principal praised the mission of Shen Yun and emphasized on the importance of passing the culture on to future generations.

“I think it’s essential,” she said. “And little children should be learning it right from the earliest of days, so I really applaud Shen Yun for actually doing that.”

As a professional in the area of performing arts, Kohler believes that Shen Yun offers a different perspective on classical dance that is beneficial for children who are passionate about dance.

“I think it would be good for children of classical ballet or other forms of dance to come along and look at it because it is so classical, but it’s so different. It’s not something they’re used to seeing, the more that they can see of any sort of art, it increases their knowledge and depth of understanding.”

Shen Yun is known for pioneering classical Chinese dance, which developed over thousands of years in ancient China but became obscured in recent decades.

Kohler had nothing but praise for the dancers and acknowledgment of the hard work that goes into the performances.

“Congratulations and well done. I think they’re amazing and wonderful athletes and I can only imagine the amount of training and hours that they put in to get that, so I commend them,” Koehler said.