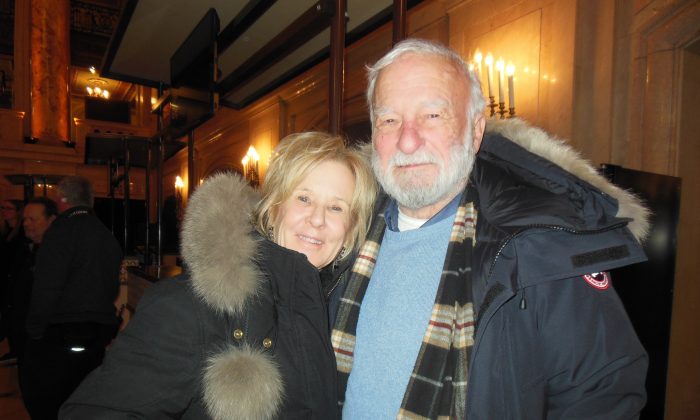 BOSTON—Dozens of dancers of Shen Yun Performing Arts graced the stage at the Boch Center Wang Theatre on Jan. 23, their every expression and movement were carried out in unison as though each was connected by a common thread.

Painter Dede Schuhmacher was impressed by the artistry exhibited by these classical Chinese dancers, in particular their synchronicity and graceful movements.

“I think the beauty is [that] they make it look so easy,” Schuhmacher said.

“That shows me they’re very talented, very disciplined and they practice a lot, when you could make something like that look easy.”

Schuhmacher attended the performance with Douglas Diana, investor in startups, in Boston. The dance company is in the midst of travelling the United States as part of its 2019 touring season. Six-equally sized companies are set to visit over 130 cities across four continents to showcase the essence of traditional Chinese culture through music, storytelling, and dance.

The painter particularly loved the synchronicity displayed by the dancers and their graceful movements.

For Schuhmacher, the beauty of the performance was not limited to its physical manifestations. She was also captivated by the meaning behind the stories presented on stage.

“[There] were very deep stories with each performance,” Schuhmacher said.

“I think it was very beautiful in that they would have very deep stories to go with everything about love, spirituality, heaven, the end of life.”

Watching those stories made Schuhmacher think about the meaning of life, the beauty of life, and the pain and joy inherent in living, she said.

Shen Yun depicts stories from China’s 5,000-year civilization through classical Chinese dance. These stories speak to the values and beliefs lying at the heart of traditional Chinese culture, including belief in the divine, good being rewarded and evil being punished, and living in harmony with Heaven and Earth.

The artist added that the femininity and grace exuded by the female dancers, and the masculine beauty of the male performers were a source of inspiration for her future works as a painter.

Diana thought the spectacle of dance coupled with the music from the live orchestra was so stunning, he got goosebumps watching the performance.

“It just reminds me how beautiful we can be as humans, those are real humans up there … those are very very beautiful,” he said.

The investor was almost lost for words in describing what made the show so beautiful. However, he noted that the combined effect of music, dance, and colors brought together was much more than the sum of its parts.

The universal themes presented in the lyrics of the songs performed by the vocal soloists also resonated with Diana. A tenor and soprano performed songs in the bel canto style, an ancient singing method that was almost extinct prior to being revived by the performers of Shen Yun. The songs convey spiritual themes central to traditional Chinese culture, such as seeking truth and returning to one’s true home.

“It’s a very universal message and it’s worth everybody seeing,” Diana said.