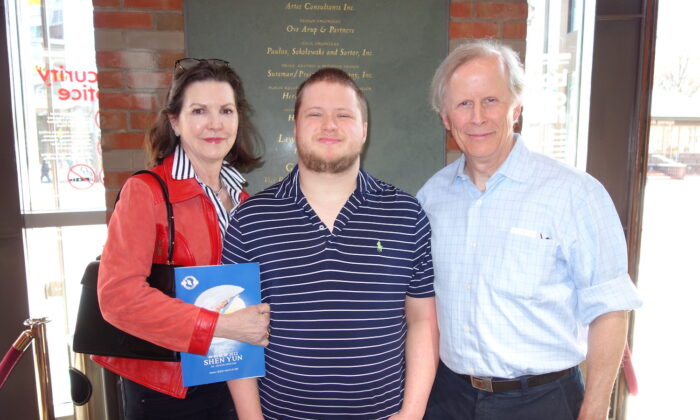 Linda and Wade Kirby and their son at the April 24 matinee of Shen Yun in Newark, New Jersey. (Lily Yu/The Epoch Times)

NEWARK, N.J.—”There are no words to describe the elegance of that performance,” said Wade Kirby, a non-profit fundraiser. Kirby, his wife Linda, and their son attended the April 24 matinee of Shen Yun at the New Jersey Performing Arts Center.

Shen Yun is a New York-based classical Chinese dance and music performance that presents 5,000 years of Chinese culture preserved from destruction under communist China. For this reason, Shen Yun cannot be performed in China today.

“It’s just such an incredible shame that the beauty and elegance and tradition cannot be performed in communist China,” Mr. Kirby said. “It’s a travesty that the people are denied the ability to see that magnificent performance. That’s such an incredible part of their heritage and their past.”

Though he was sad to know that Shen Yun is banned from mainland China, he was heartened to learn that Shen Yun has seven companies touring the globe.

“We all need this kind of beauty in our life,” commented Mrs. Kirby. “And it was very inspirational. I really enjoyed that sacred beauty of it. … I think we can all take that little bit of that in our heart.”

Another attendee, Noah Mullette-Gillman, is a novelist and a teacher at Mercy College. His curiosity and love for mythology led him to explore Chinese culture through Shen Yun.

He was surprised to find that he derived meaning from the dancers’ small movements, which are part of the rich vocabulary of Chinese dance, a system with thousands of years of history.

“There was such a graceful, powerful energy among the performers. Even the movements you could sense from their chests. So much beautiful energy,” he said.

“I felt I need to see [it] the second time to really absorb the story,” Mr. Mullette-Gillman continued. “On the first time through my understanding of the story is limited. But if I see it a second time, I think I’d grasp it better. I did love what they talked about, about humanity being so old and coming back to Earth. I thought that was beautiful.”