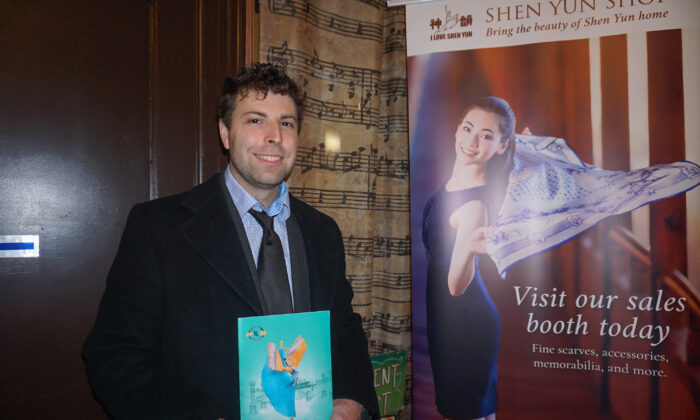 ALBANY, N.Y.—Great art connects to the human experience and inspires meaning in our lives. Such was the case for trumpeter David Rydelnik, who saw Shen Yun Performing Arts at Proctors in downtown Schenectady on Jan. 21, 2020.

“[I feel] joy, very much so, happiness. You forget your troubles because you’re here,” Rydelnik said. “[I enjoyed] the artistic aspect, and the spiritual aspect as well.”

Rydelnik said he was leaving the theater feeling lighter, and he was sure others were too.

“I would hope that they would want to get more out of life after seeing this. So many people are so depressed, they’re so uptight about things,” Rydelnik said.

New York-based Shen Yun has taken the world by storm in the past decade, using classical Chinese dance as the foundation for a unique performance that revives the culture of the 5,000-year divinely inspired culture of ancient China.

This was a world where heaven, earth, and humankind sought to exist in harmony, a civilization that called itself the “Celestial Kingdom” and began with the myth of a Creator descending to earth to depart said culture.

Rydelnik recounted songs and stories he’d witnessed in the program, and how the spirituality, the divine, was threaded throughout.

The show mentioned things about atheism and evolution and things like that give you no purpose to life whatsoever. But believing in God, for example, gives you purpose, because your life has meaning, as opposed to if you’re just here by accident.
— David Rydelnik

“The show mentioned things about atheism and evolution and things like that give you no purpose to life whatsoever. But believing in God, for example, gives you purpose, because your life has meaning, as opposed to if you’re just here by accident,” Rydelnik said. It is food for thought for the audience. The ancient culture inspires, even in the modern-day. “I think that’s why people feel better about things when they leave. It gives people a purpose to think of, yes, there’s a God.”

Rydelnik said others might, like him, glimpse the understanding “that there’s more to life than just what they see, there’s also meaning behind what we do.”

The finale of the performance hit home for Rydelnik, reinforcing that message for him.

“In the end, all things will become new, and nothing is permanent,” he said. “Everything can be destroyed in an instant, everything that we try to build materially can just be gone in a second, but the spiritual aspect of things is permanent.”