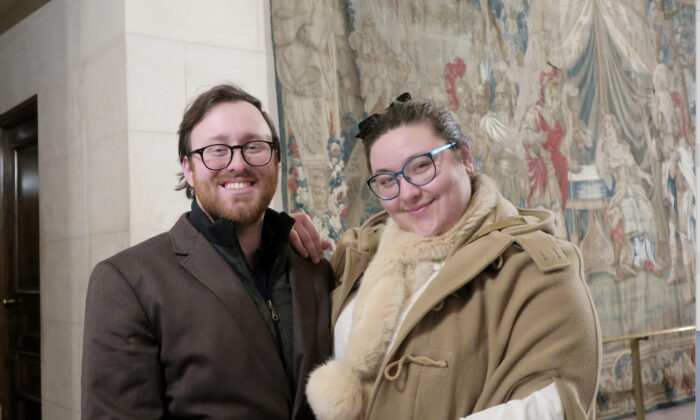 SAN FRANCISCO—Husband and wife Dillion and Nika Plummer were in agreement about their experience after watching Shen Yun’s performance in San Francisco on Jan. 2, 2020.

“I also felt China’s soul—I’m sorry to steal her line, but it’s so true,” added her husband, Dillon.

Nika, a teacher, and herself, a pianist and opera singer, expressed her and her husband’s love for the show.

“We loved it very much. We loved how beautiful everything was—and there was so much. It was a very full performance. I really felt China’s soul for the first time. It was fantastic,” she said.

Emphasizing his wife’s glowing praise, Dillion went on to say, “I loved it. I loved all the costumes. I loved the storytelling … I also felt China’s soul—I’m sorry to steal her line, but it’s so true.”

More Than Just a Display of Exquisite Technique

Dillon said the Shen Yun is very educational, but that it goes beyond that.

“It makes you feel something inside. You know, just you can’t really describe it, but you just feel like, the people playing the instruments really feel the music. The people dancing, they have something to say,” he said.

Nika agreed, and said the performers weren’t merely trying to be impressive.

“It’s not just a technical performance. … There’s a movement inside of the dance and inside of the music that shows somebody’s soul,” she said. “That’s exactly what we need!”

Shen Yun means “the beauty of divine beings dancing,” and Dillon said that was exactly what the artists portrayed.

“They’re really talented at what they do, but it’s beyond just the technical execution,” he said.

“This is the soul of classical China, right? This isn’t just what’s popular and modern China, what’s government approved, right? This is actually going back and learning about where everyone—where your culture came from,” Dillon said.

Both Nika and Dillon spoke of seeing China’s humanity in the performance.

“Seeing China’s humanity through the lens of performance that’s more or less universal,” Dillon said. “This is the international language, right? Performance, song, dance, music. I think that’s the perfect way to communicate all these things.”

Nika said traditional Chinese culture is a gift to both Chinese and other nationalities.

“I think it’s a wonderful gift, anybody who’s Chinese, to have that heritage,” Nika said. “And for people who are not.”

A Story That Hit Close to Home

Dillon said he really liked the mix of different kinds of stories portrayed in Shen Yun, from comedy to the serious to archetypal characters that could be universally recognized.

One particular aspect stood out to the couple, which was highlighted in a dance piece that showed modern-day China, and Dillon felt “was exposing the dangers of communism.”

Dillon was referring to a dance piece that depicts Falun Gong practitioners in China being persecuted by the Chinese Communist Party (CCP) for refusing to give up their beliefs.

Falun Gong is an ancient Chinese meditation discipline that follows the principles of truthfulness, compassion, and tolerance. The practice has been persecuted by the CCP since 1999, and the brutal persecution still continues today.

The couple understood from personal experience.

“My parents are from Russia. So I understand,” Nika said. Nearly all of her family was killed during the Russian Revolution in 1917 by communists, except for some of the children.

Dillon’s family is Jewish and lived in Germany during the Third Reich.

The pair was especially impressed by the two-stringed Chinese instrument called the erhu, whose emotive voice they experienced like never before.

Dillon marveled at hearing “the full expression” of the ancient instrument.

Nika described the erhu as being dynamic and emotional.

“It shows emotion. It’s not just notes that are being played. It’s a feeling, it’s the attachment with the musician to the instrument, and it really feels like [it’s] how it should be played. It’s really nice,” she said.

With reporting by Michelle Yang and Grace Coulter.