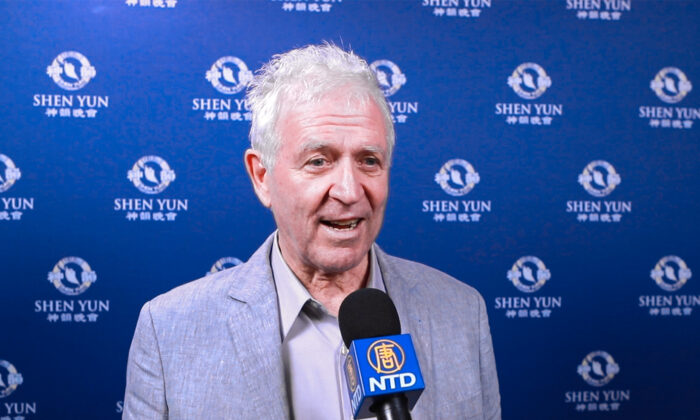 SYDNEY—The world-renowned Shen Yun Performing Arts has almost completed its first week of performances at the Capitol Theatre in Sydney, Australia, where Paul Macneill, an honorary associate professor in Ethics and Law at the University of Sydney, had an elevating experience on March 6, 2020.

“In one sense it’s ethereal, but I don’t want to use that word in a loose way. It’s elevating. I have to say it’s elevating. For me, it’s real art. It’s a form of art I’m not familiar with, but I feel very privileged to have been introduced to it,” Macneill said.

The dancers of the New York-based company made a strong impression on the associate professor.

“I think the delicacy of the movement, I mean it’s incredibly physical movement, but it’s done with such grace. Obviously, they are very very well-trained dancers but the way they perform is so controlled and yet flowing, and I just think it’s aesthetic,” he said.

Classical Chinese dance is a complex system, on par with ballet, which has been developed over thousands of years. It emphasizes not only on the external physical movements but also the inner feelings that drive the dancer’s body into motion.

The movements in classical Chinese dance are rich and varied and capable of expressing joy, sorrow, anger, the emotions that come with parting and reuniting, insanity, sickness, solemnity, as well as civil, military, and other personalities.

Macneill said that the animated backdrops gave him an understanding of the cultural background and found the mission of Shen Yun to be enlightening.

“I think the whole project is very enlightening. I understand the story that this is a group that’s trying to maintain the thousand years old tradition, which may have suffered under communist rule in China, and I really respect that commitment to the art,” the associate professor said.

The performance also conveyed a divinely inspired theme that stood out to him.

“I see it as divinely inspired. And for me divinely inspired doesn’t mean that it’s not earthy, because divinity and Earth meet beautifully in this context. These people are grounded and elevated. It’s the Heaven and the Earth coming together. I really understand that,” he said.

“I want to write emails as soon as I get home! I don’t know how many nights are left but I’d love for my friends to see this. I had no idea that it would be this good,” Macneill continued.