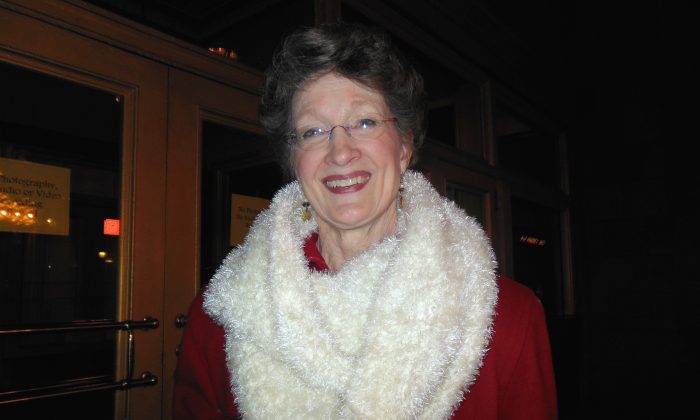 KNOXVILLE, Tenn.—Shen Yun Performing Arts is more than entertaining, according to one audience member. “The creative genius that put this together is to be commended,” said Sandy Peterson, who saw Shen Yun’s last performance at the Tennessee Theatre on Feb. 25.

Breathtaking dance performances, hundreds of hand-made, colorful costumes, a unique orchestra that combines traditional Chinese instruments and classical Western instruments, and state-of-the-art animated backdrops; add to that the profound presentation of traditional Chinese culture and history, and one can’t help but have the highest of praise for Shen Yun Performing Arts.

“The expression of their history through song and dance was communicated beautifully, and I found that very beautiful and inspiring,” Ms. Peterson said, who came to the performance in a party of eight people.

Founded in 2006 by leading classical Chinese artists, New York-based Shen Yun is on a mission to revive China’s divinely inspired culture. The company made a two-day stop in Knoxville from Feb. 24 to 25.

Weena Babcock missed the chance to see Shen Yun the last time it were in town, but wasn’t about to let the chance go again this year.

“When I started seeing it advertised, I really wanted to come,” Ms. Babcock said.

“And, it was a beautiful show. The message was just wonderful, and beautiful dances, with the costumes, were just exquisite. I thoroughly enjoyed it,” said Ms. Babcock, who used to teach music.

Ms. Babcock said she has always felt a strong connection to China, as her aunt and uncle used to live there when Ms. Babcock was a child, so China was a part of her life as a young girl.

Unfortunately, Ms. Babcock’s uncle and aunt, who were missionaries teaching in a Christian college in China, were persecuted by the Chinese communist regime, a story that is all to familiar for many with connections with China who themselves or their loved ones have faced persecution by the Communist regime for one reason or another; this includes Shen Yun artists, most of whom are ethnic Chinese.

This connection to China helped Ms. Babcock enjoy the performance even more, and she enjoyed the meanings and themes she saw in the lyrics of songs performed by Shen Yun’s award-winning vocalists.

Coming to Shen Yun for David and Laureen Gruginski was a marriage anniversary celebration, marking 29 years of marriage.

“I think I have enjoyed all of them, that I am even surprised at the costumes, how elaborate they are,  the detail[s] in them, they are really beautiful,” added Ms. Gruginski.

Through the performance, Mr. Gruginski said he could see that China has a much more spiritual tradition than he realized.

“They have a tendency to look more towards the unknown, or things outside of themselves, or gods, or God, for their strength, and their peacefulness, as opposed to just men alone,” Mr. Gruginski said.