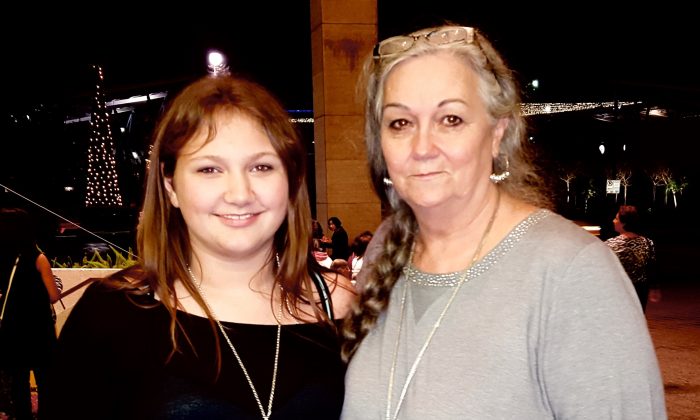 HOUSTON—Twelve-year-old Maci Rebesh loves to dance, and her grandmother Dahlia Meyer loves seeing how happy it makes Maci. So when Ms. Meyer heard from a friend that classical Chinese dance company Shen Yun Performing Arts was starting its 10th world tour in Houston, she picked up the phone and bought not one, but two pairs of tickets for her and her granddaughter—just in case they couldn’t make opening night on Dec. 22.

“Now we’re seeing it again on Jan. 2,” said Ms. Meyer with tears in her eyes outside the Jones Hall for the Performing Arts. “It was beautiful, it was fantastic.”

Both Ms. Meyer and Maci had cried several times during the performance as the dances were so full of drama and emotion, they said, and teared up again during the interview. When the emcees had explained the meaning of the name Shen Yun, it touched Ms. Meyer’s heart.

Shen means divine, and Yun is the inner spirit or feeling behind a movement—which is unique to each person. The name translates into something like “the feeling of divine beings dancing,” the emcees explained. Ms. Meyer said she heard this and thought about Maci’s dancing and how the movements are her own, and reminiscent of the divine.

“It was awesome, and some of them are very touching,” Maci said about the short dances that make up the evening’s program.

The grandmother and granddaughter noted many dances that were so moving: Chang’E being torn apart from her husband in “The Lady of the Moon,” the healing of a practitioner of the spiritual practice Falun Gong after suffering persecution in China, in “Hope for the Future,” and more.

Yun is important in classical Chinese dance, which is what New York-based Shen Yun mainly performs. It is what allows the dancers to portray such a wide variety of characters—from Manchurian princesses to Taoist immortals, famed calligraphers to joyful drumming Mongolians—with such expression.

Valerie McSweeney and Rebecca Overton, connoisseur of all things in the performing arts and self-described as professional theatergoers, couldn’t say enough good things about the dancers. They had wanted to see Shen Yun for years and years and finally had the chance to do it.

Ms. Overton described in detail the footfalls and balance of the dancers in “Manchurian Maidens,” how they could flutter like it was effortless, aware of even their hems in their movements, while walking in raised “flower pot” shoes. She described the movements of the male dancers in “Poets of the Orchid Pavilion,” with their flowing fans and the accompanying calligraphy projected onto the digital backdrop.

Classical Chinese dance is an independent dance system of its own, having been passed down for thousands of years and refined though the dynasties. According to Shen Yun, it is built upon profound traditional aesthetics and shows China’s rich cultural heritage.

“I think it’s beautiful and elegant, the way they moved,” said Mr. Richard Gonzalez, a company owner in the collision industry. “It just looks like they’ve been doing this for millions of years.”