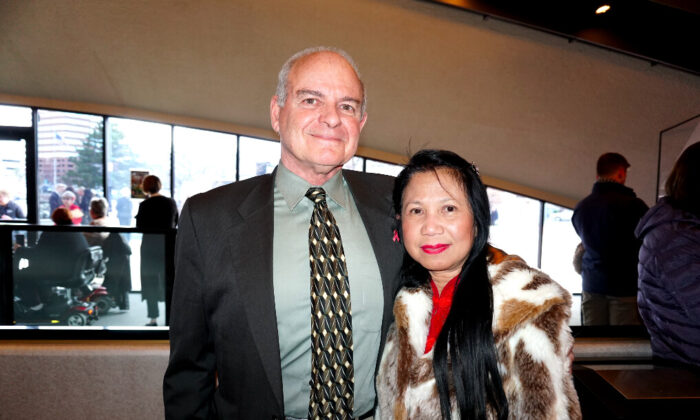 RENO, Nev.—Discovering buried treasure is, for most people, a once-in-a-lifetime experience. So when William Sherman, a hotel director in Nevada, returned to see Shen Yun Performing Arts a second time and got to witness the stunning details of the artistry, emotions, and legends that, as he said, may go unnoticed by many people, he was thrilled.

“My overall impression is that most people would not appreciate the athleticism and the precision of [Shen Yun‘s] movements and how difficult their dance routine was. I’m just very, very impressed with how well they did and the overall perfection of their performance,” Sherman said.

“I would highly recommend [Shen Yun],” he said. “I would never tell anybody to not come to see this. They would definitely need to see this because you only get to do this like, maybe if you are lucky, once in a lifetime.”

“I didn’t think I was going to get another chance!” he said.

New York-based Shen Yun takes as its mission the revival of traditional Chinese culture, including its profound spirituality and rich art forms developed over thousands of years. Each Shen Yun performance consists of roughly 20 vignettes that include storytelling dances, bel canto vocal performers, and ethnic and folk dances, all accompanied by a live orchestra.

After 17 concerts across 3 countries, the Shen Yun Symphony Orchestra has successfully completed its 2019 tour. Now we invite you to take a look at part 1 of our behind the scenes photos. Enjoy!

Classical Chinese dance is an exceptionally expressive art form, with techniques and inner bearing that make it distinctly Chinese, and able to convey that culture’s profound history.

According to Shen Yun’s website, “China’s deep cultural traditions are contained in classical Chinese dance, allowing its movements to be richly expressive, such that the personalities and feelings of characters can be portrayed with unparalleled clarity. It is therefore capable of depicting scenes from any time period, whether ancient or modern, Eastern or Western, in a strikingly vivid way.”

Often our audiences are moved to tears when they see a Shen Yun performance, but they aren’t sure why they’re so deeply touched. All of our artists share a common understanding that in order to create art that is truly sublime, they need to improve themselves as people first. Shen Yun performers meditate together and try to be true, kind and patient individuals. This is our performing arts company’s inner difference. As the ancients used to say, “To elevate one’s mind is to elevate one’s art.”

“There were so many little things in their movements, in their physical movements, that people don’t realize,” Sherman said, “their facial expressions, what they did with their hands, how they move their feet, and the balance they have to have to do these things. So, it was very, very impressive.”

The stories in Shen Yun are drawn from throughout China’s history, as well as from modern China.

“Oh, I love the stories. The stories are great. People don’t, a lot of American culture doesn’t realize that we have tall tales in our culture and the Chinese have also tall tales or fables in their culture and they lend you insight into that culture,” Sherman observed.

It’s almost time! After months of rehearsals perfecting new choreography and music, creating hundreds of unique costumes, and designing theater-expanding animated backdrops, the time to share all this with you is almost here. There less than a month to go before we kick off the 2020 world tour with a completely all-new production! Are you ready for it? Find a performance near you: https://sypa.us/2FbwR2U

The scenes from present-day China, about a persecution against spiritual believers and those who stand by them, sparked Sherman’s curiosity. He said he will look up more about those true events when he gets home. He already read something about how “the communist powers to be are very much against” Shen Yun, and he’s right. Around the world, the Chinese Communist Party has attempted to interfere with the company’s performances, and have recently made false claims that Shen Yun dancers are from China and are dangerous to go near because of the coronavirus. Shen Yun’s artists haven’t been back to China for years and are all based out of New York.

What scares the CCP the most is Shen Yun’s continuation of China’s tradition of spirituality and acknowledgement of the Creator, which have been part of China’s heritage since time immemorial. Traditional Chinese culture is perceived by the CCP as a threat to its legitimacy and power. The regime is officially atheist.

Sherman applauds Shen Yun for its efforts to bring back China’s authentic culture.

“We should always pay attention to tradition and classical dance and the tales that come through our different cultures because we can learn so much and that’s the main reason,” he said. “It’s not only for entertainment, but to teach us how we should treat one another and how we should go through life.”

“I’m a very spiritual person so I definitely believe that there is fate involved,” he said. “There is an ultimate entity, whether you want to call it God or not, that is in control of our earth and our destinies and guides us through our lives and for us to learn how to love one another and how we should treat one another.”

For Sherman, this year’s Shen Yun “was as fantastic as the first one I saw, so that’s what made me come back and my young lady friend had never been to the theater before—[her] first time in the theater—so I wanted her to experience that. And like I said, I had been to one before; I knew she would enjoy it immensely.”