Graphic Designer Inspired by Shen Yun’s Images: ‘So positive and full of color’ 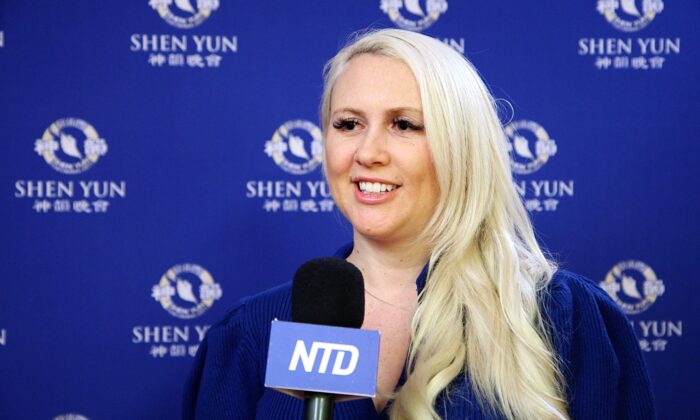 MONTREAL—Each year, Shen Yun Performing Arts attracts artists and design professionals with its original choreography, interactive and animated backdrops, and couture costumes. Tonight in Montreal, one director of marketing came away feeling awed by the designs she saw and the values depicted in the performance.

“I love the colors. I’m a graphic designer, so, you see, just the backdrops and the colors—so bright and light. Especially in Montreal when it’s very cold and wintery, it’s nice to come and see something like this. It’s so positive and full of color,” said Kristy Pealow at the Place des Arts in Montreal on Jan. 4, 2020.

“I thought the show was magical; it brought culture, values, history altogether. And I think at the end of the day that’s what you want to see. You want to be inspired and you want to see different traditions.

“They’re telling a story that brings a lot of history and values and it’s just magical. It’s an experience, it’s kind of one of those experiences that takes you into another world and I think you appreciate the details, the music, the look, the colors; it’s just, it’s a beautiful experience,” she added.

New York-based Shen Yun’s mission is to revive China’s 5,000-year-old civilization, which is intertwined with spiritual practices such as Buddhism, Taoism, and Confucianism. Pealow thought this aspect was one of the most successful of the show.

“There was a lot of meditation, there was a lot of slow pace, that you have to appreciate the moment. And we have, in the Western culture, it’s really  go-go-go, 24/7, and it almost was like, ‘stop, smell the roses and enjoy life.’ So that was nice.”

“What inspired me about this? I think it was just the storytelling. You know, a lot about meditation, and you look at different things are happening in the world and you’re seeing how life the Western world is very different than how it is in China right now. But at the end of the day, we have the same values: integrity and being a good person … being kind, and the importance of family and tradition. I think that’s what we see in terms of the story. It’s very inspiring,” Pealow said.

“I think what was nice is that you saw all different emotions; there was humor, there was sadness, there was happiness, there was joy—it was a story that told all facets of emotions, which is very nice to see,” she added.

From the design of the program book to the content of the stories on stage, the artistically-astute Montrealer urged Shen Yun to keep going and keep inspiring people around the world.

“I think now more than ever we need more, we need to really focus on those values of being a good person, kind and being open,” she said. “That’s what I think I learned from Shen Yun.”

“I loved the show! I definitely would recommend it. You leave feeling inspired.”

With reporting by NTD Television, Weiya Yang, and Brett Featherstone.