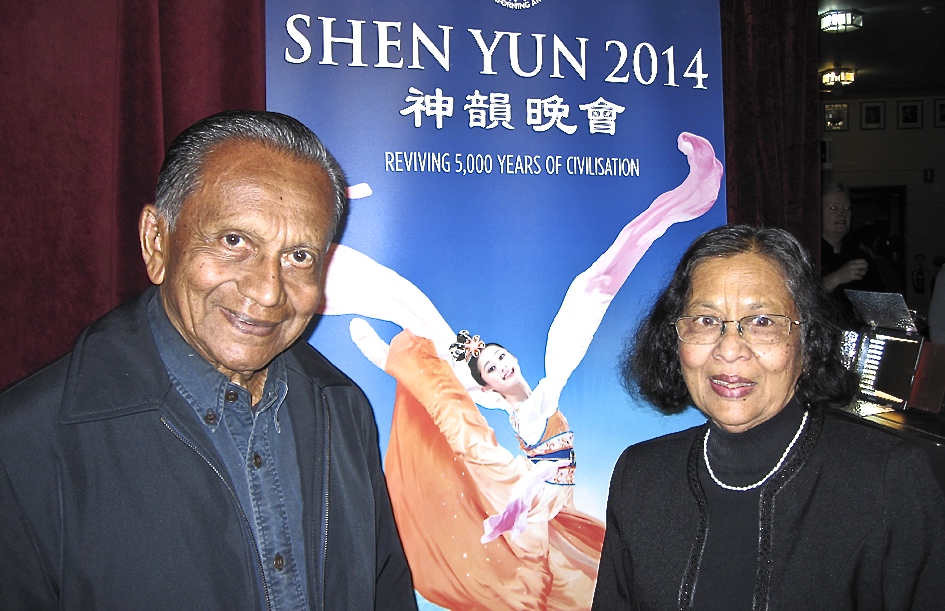 PERTH, Australia—Retired ballet dancer Ranji Weerasooriya was full of praise for Shen Yun Performing Arts. She was part of the enthusiastic audience at the evening performance, on Saturday May 3, at the Regal Theatre in Perth.

Ms. Weerasooriya was a former ballet dancer in Sri Lanka and travelled the world to many countries including Russia. On coming to Perth forty years ago she ran her own dance group.

From a dancer’s perspective, she was appreciative of all the aspects of Shen Yun—the costumes, the state-of-the-art digital backdrops, the ancient stories accompanied by a blend of Chinese and Western instruments in the orchestra.

“Fantastic! Beautifully done! I loved seeing the traditional dances being put on, and I enjoyed seeing the modern technology being used—all the graphic design, the technology with the backdrop and the dancers disappearing and all those things add to the interest. And the groups and the formations were fantastic, the costumes were glorious.”

The Shen Yun website gives more information about the costumes.

“Every costume in a Shen Yun performance is presented with brilliant colors, displaying a splendid spectacle—from the Tang Dynasty’s “Raiment of Rainbows and Feathers” to imperial dragon robes, phoenix coronets, and cloud capes; from the civil official’s headdress and robes to the warrior’s helmet and armor; and from the traditional rightward cross-collared Han clothing to the ethnic attire of the Manchurian, Tibetan, Dai, Mongol, and Uyghur ethnic groups.”

As a traveller into China at one time, Ms. Weerasooriya felt she could relate to the 5000 years of Chinese history and culture that was captured by the dancers through the medium of classical Chinese dance.

She also admired the expressions of the dancers and especially their joy.

“I loved their facial expression especially the ones where they were relating stories, very good, and the dancers were so relaxed and enjoying themselves,” she said.

And New York based, Shen Yun has classical Chinese dance at its heart and is grounded in 5,000 years of divinely inspired culture. Ms. Weerasooriya loved the way the dancers told the stories.

“Beautiful, very, very well done, very skillful and I loved the leaps and some of the different rhythms in the dance and the hand movements, especially the lotus dance and the ones where they did the Mongolian dance.”

She found the whole performance spiritually uplifting saying, “One begins to contemplate on life and enjoyment and what we are going through in the world today, and I think dance can do a lot to help people to mingle and meet and tolerate others.”

According to the website, “Classical Chinese dance is rich with expressive power. Through expression of bearing and form, beautiful dance movements bring out the inner meaning of intrinsic thoughts and feelings, reflecting the peculiarities of human nature, the standard for human conduct, moral concepts, mental state, one’s value system, and so on.”

She felt sad that this show cannot be performed in China but was quick to recommend it to family and friends. “I will say: don’t miss it.”

And regarding the performers, “They should be proud of themselves, I think it’s fantastic and I would congratulate the choreographers—very skillfully done.”