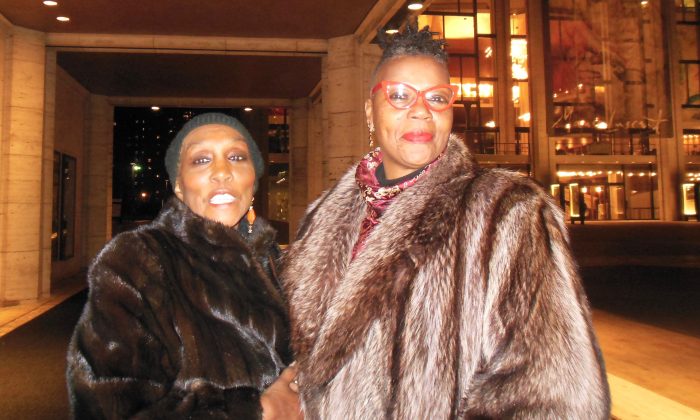 Melody Burns (R) was dazzled by the beauty of Shen Yun’s magic, at Lincoln Centre, on March 4, 2016. (Sherry Dong/Epoch Times)

“The colors were magnificent, the precision of the work was absolutely wonderful,” she said.

Ms. Burns’ designs—sold under her jewelry shop, Kiini Ibura—have appeared in the New York Times and Elle magazine, and have been worn by celebrities like the late Ruby Dee, Jill Scott, and Angie Stone.

At the performance on Friday, she found inspiration for her work. “Everything looks like flowers to me. Even the water scene reminds me of lilies in the water,” she said, referring to the dance “Fairies of the Sea.”  “I am going to go home and sketch out something for jewelry now.”

Part of this was because of the spirituality of the 5,000-year-old culture, which is said to be divinely inspired. Ms. Burns said she felt a connection to the spiritual messages in Shen Yun’s vocal performances and dances. It made her think about themes like the meaning of life, “what you are here for—you are looking for the correct way of living,” she said.