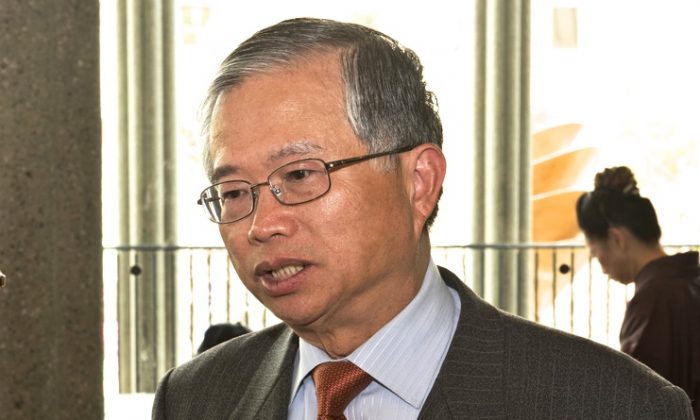 Ming-Yao Tsai, director general of Taipei Economic and Cultural Office in Osaka, attends Shen Yun, in Nishinomiya, along with about a dozen of his staff on April 16, 2015. (Nogami/Epoch Times)

NISHINOMIYA, Japan—”After seeing the show today, it proves that Shen Yun deserves its reputation,” Director General Tsai said, after attending Shen Yun along with about a dozen of his staff members, on April 16.

“It’s indeed remarkable. The performance is reviving the 5,000 years of Chinese civilization,” he said.

Mr. Tsai was in awe at the program depicting the traditional Chinese culture featuring spreading goodness and restraining evil. He said, “Our society needs the spirit of repressing evil and encouraging good. If people can do more good things, the society will be better off and become more peaceful; if evil forces keep prevailing, we would lose our peaceful and free lives. Through artistic and cultural performances, it (Shen Yun) inspires people to pursue kindness. It’s really something very good.”

According to Shen Yun Website, Shen Yun presents colorful and exhilarating performances of classical Chinese dance and music. A performance by Shen Yun is a presentation of traditional Chinese culture as it once was: a study in grace, wisdom, and virtues distilled from five millennia of Chinese civilization.

Impressed by the piece The Power of Compassion, he praised Shen Yun for its promoting kindness. He said, “The Confucianism beliefs we have received since our childhood are the same as the compassion in Buddhism. All of them can help people to be good, and become good citizens.”

“Take the piece The Fable of the Magic Brush for instance. The evil people will eventually be punished. We cannot oppose the law of causality; good and evil will have their karmic retribution when their time comes,” Mr. Tsai said.

“Shen Yun show is different from ordinary performances. Not only is it an art, but it is also full of positive energy that touches the bottom of our hearts. It can purity human’s hearts,” praised Mr. Shima Takahiro, chairman of a Japan design association, after he attended the Shen Yun performance on April 15 at Hyogo Performing Arts Center along with his friends from the media circles.

Moved by the dance The Power of Compassion, he said, “The plot of returning good for evil is very touching. The policeman perpetrating the abuse was finally moved by the power of kindness. Shen Yun show has very profound spiritual connotations. This kind of show is few and far between.”

“Nowadays, regardless of whether it is in Japan or the United States, some artistic performances may seem exquisite, but they would soon be wiped out from people’s memories. However, Shen Yun is something special … It will leave behind a touching feeling lingering in the bottom of our hearts for good,” he explained.

“The sound of erhu is very unique, from which we can feel its profound connotations of Chinese culture. It is a pity that the erhu player only performed one piece. I felt like listening more. I would definitely attend her performance in the future,”he said.

The performance swept Ms. Hiroko Izumio off her feet. “As soon as I saw the first program after the curtain was raised, I cried because I was so excited and moved. I regret that I didn’t come to see it the years before.” Izumio is the president of Will Project, an NPO organization that researches on the will and its applications.

“When the curtain was raised, I felt overwhelmed. The artists were so skillful.”

She finally made it to a performance. “This is my first time watching Shen Yun. I have heard it before many times and never made it to see the show. This year a friend of my highly recommended it and here I am.”

“The costumes are very dazzling and luxurious. They brought me into a beautiful dream world.”

The Shen Yun Orchestra impressed her. “I enjoy the live orchestra and the magnificent effects from the background projection. I was so drawn to them two and half hours seemed like an instant.”

Izumio enjoys and goes to theaters a lot. She praised Shen Yun as “supreme. I want to say that it is the best I have seen. Those I had seen are not even close to Shen Yun’s quality.”

“This is traditional art and needs to be passed down to generations.”