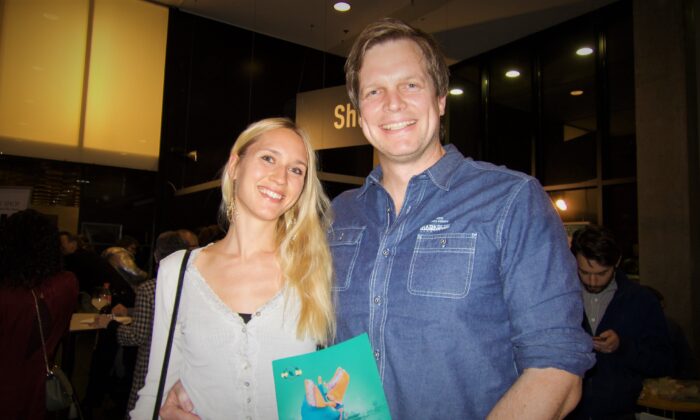 Stefan Schauble, a television journalist and moderator, and his fiance Vanessa Augustin, attended Shen Yun on Feb. 26, 2020, at the Musical Theater, in Basel, Switzerland. (The Epoch Times)

BASEL, Switzerland—Stefan Schauble, a television journalist and moderator, and his fiance Vanessa Augustin, an artist, attended the second Shen Yun performance at the Musical Theater Basel, Switzerland, on Feb. 26, 2020, as a celebratory present for their engagement.

Both had attended other shows at the Musical Theater, in Basel, but were truly looking forward to being in the audience, after having done some research concerning the Shen Yun Performing Arts Touring Company.

According to the website, Shen Yun translates to “the beauty of divine beings dancing.”

Shen Yun Is Precious and Spirited

During intermission, Schauble spoke highly of what he had seen performed on stage.

“What I have seen so far is very interesting—a fantastic and totally artistic performance—just super,” he said.

When he spoke of the artistic effort, he pointed to the dancers’ ability to express what was in their hearts.

“However, we cannot forget the music, which highlighted the dancers’ movements. Everything is pleasing to the eye, and ear,” he added.

Schauble explained that he was “amazed to see so many different dance elements. All that makes me truly believe that it was something from China, and not from the Western world.”

Augustin joined into the conversation and said, “This show is precious, and what is so amazing is that there is much spirit in the performance. There are so many words to describe the performance.”

In her mind, she could have filled an entire page with what is in her heart. “It is the perfect way of celebrating my engagement,” she said.

Augustin, an artist herself, was amazed to learn from the artistry of the production.

“The colors are truly beautiful, and of a combination, I would never have tried in my paintings in the past. But, now, seeing the scenes on stage, I realize that the colors are well matched.”

For her, learning something new, getting different ideas, made it well worth attending the Shen Yun performance.

“On first glance,” said Augustin, “I realized that I would have never attempted any combination of the colors that were shown on stage. But, now, after seeing the stage setting, I decided to give it a try when attempting a painting on my canvas.”

“This has opened a total new world for me,” she said.

With reporting by Heide B. Malhotra.