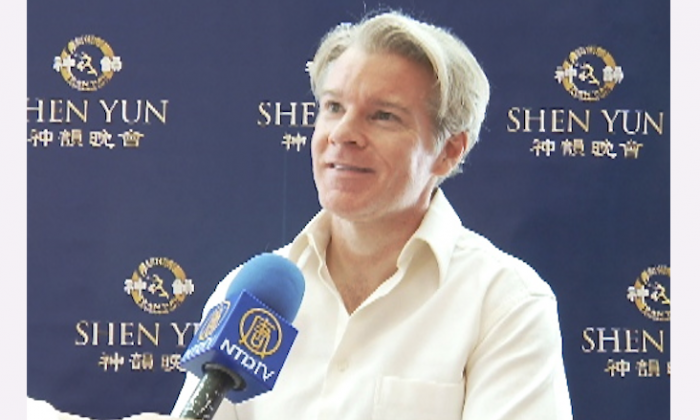 Mr. Sleesman serves on the Phoenix Mayor’s Commission on Disability Issues, and is also the co-founder of the Phoenix Sister Cities, Disabilities Awareness Committee.

“The show was fantastic, the performance was top notch, it truly was,” said Mr. Sleeseman.

Established in 2006, Shen Yun is a non-profit organization dedicated to bringing 5,000 years of Chinese culture to life through the performing arts. With shows in roughly 20 countries and over 100 cities, Shen Yun has reached millions of people and become widely recognized as global phenomenon.

“I enjoyed the timing, the creativity, and the style,” Mr. Sleesman explained. “I thought it was beautiful.”

He said it was the “first time I have ever seen such a performance like this.”

Mr. Sleesman seemed to particularly enjoy the dance entitled Mongolian Chopsticks. He said in “the chopstick number; the men were very well choreographed, they truly were.”

“And I enjoyed the history lesson that you got throughout the performance,” added Mr. Sleesman. “It was a nice touch.”

According to the Shen Yun website, “Many of the tales and characters depicted in Shen Yun dances draw inspiration from ancient records and classics. Based on documented historical events, these stories give abstract ideas—like loyalty, filial piety, selflessness, and tolerance—a concrete form.”

“That was very creative,” he said. “I like how the characters just pop out of it, from the stage.”

As stated on the website, “These digital backdrop designs complement and synchronize all aspects of the performance: the characters, color of the costumes, specific dance movements, props, lighting, the story being told, particular notes played by the orchestra, and special audio effects.”

Mr. Sleesman’s parting words were directed at future audience members, describing to them why they must “definitely” see the show for themselves.

“First class; it has style and elegance from beginning to end,” said Mr. Sleesman.

“Definitely come to see the show, I think you will enjoy it—definitely.”

With reporting by Morgan Bradley