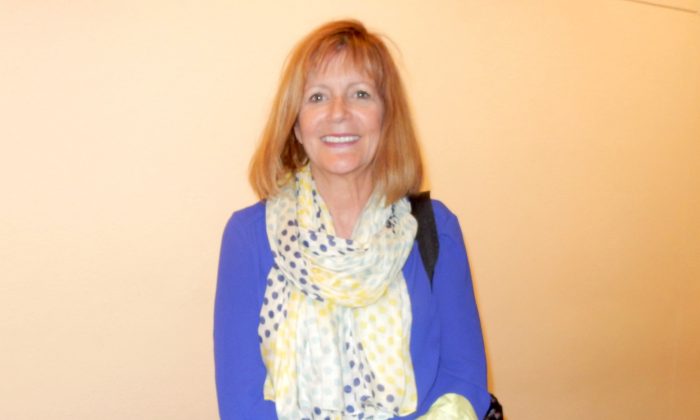 Shen Yun’s mission is to present true traditional Chinese culture through the performing arts. It does so through classical, folk and ethnic dance, a live orchestra using both traditional Eastern and Western instruments, costuming, and digital backdrop which act as sets.

“I like the talent,” said Ms. Lewis, who is an adjunct instructor at Butler Community College in Education Management. “I don’t know what it takes to do all that, but I know it is a lot of work. It is amazing to see their bodies do what they do. So I love that dance part.”

“I love all the costumes. I love seeing the design and that color combinations, I particularly looked at that,” said Ms. Lewis.

She was particularly impressed with how the costumes are incorporated into a part of the performance, particularly the sleeves and the use of the entire arms in the dance expressions.

The story lines made Ms. Lewis think that “people all around the world look for meaning, … [and] that there is something greater out there than themselves. And so, that was interesting to see that.”

Ms. Lewis’s take away from the Shen Yun performance was best described as “Beauty, beauty, just beauty,” she said.

“If you like cultural things, if you like dance, you should go [see Shen Yun]. I love dance,” Ms. Lewis said.

Donna Goodnan, an apartment leasing agent, saw the same performance on May 4. She too was impressed with the dancing, but also the music, digital backdrops, and the beautiful culture.

“I thought it was very beautiful. I like the dance … lot of the moves [are] very gymnastic, with the last dance especially, Ms. Goodnan said.

In fact, gymnastics grew out of classical Chinese dance, rather than the other way around.

Ms. Goodnan found the digitally animated backdrops for the 20 or so mini-performances to add to the story telling by showing such details as terrain and landscape. “It was very beautiful,” she said.

Shen Yun’s goal is to keep China’s traditional culture alive. It has been almost completely destroyed by the communist party regime with anti-tradition campaigns such as the Cultural Revolution of the 1960s and 1970s, due to state authorized atheism.

Traditional Chinese culture is based on reverence for the divine and the associated morality. The ancient Chinese held that humankind’s culture was bestowed by the heavens.

“It is a shame, a travesty—I mean, that is their culture, and to be ashamed of it and hide it, I think that’s wrong,” Ms. Goodnan said.

“It is a beautiful culture, and it is a shame that they are suppressed,” and cannot continue to respect its origins and live by its beliefs.

Ms. Goodnan will recommend Shen Yun to family and friends.

“I really enjoyed it,” she said.