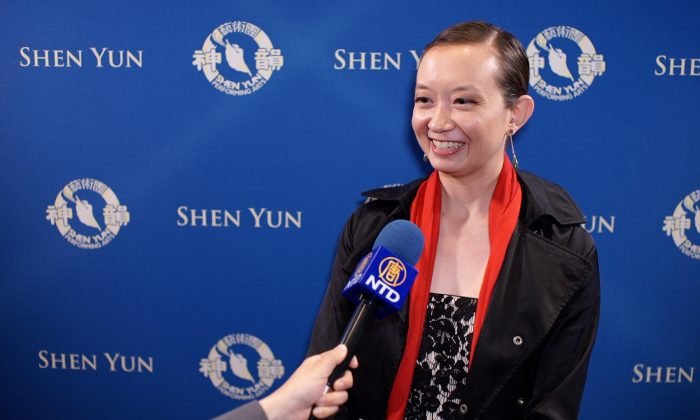 PHOENIX—As a ballet teacher and dancer, Antoinette Klimek could see the countless hours of training and practice that had gone into a Shen Yun Performing Arts production. Klimek said what comes through the performance is the performers’ spirit and heart.

“As a dancer, I feel it also takes a lot of emotional strength and mental strength—it is so disciplined—to be able to endure that training process and again to just get up there and do it night after night and keep it fresh. That is how it looked to me, just fresh and new,” she said. “I’m sure these performers are performing a lot and they are touring. I never got a sense of all that fatigue that some of them must be feeling.”

Klimek experienced Shen Yun at the Orpheum Theater during the evening performance on Feb. 23. The New York-based Shen Yun is in the midst of its 2019 tour and is set to perform in over 100 cities around the world.

The traditional dance and music company uses performing arts to tell an untold story about China and depict what was lost due to seven decades of communist rule.

Klimek, who has a large dance repertoire, trained throughout the United States, studying at Ballet Omaha, American Ballet Theatre, Western Arkansas Ballet, Lou Conte Dance Studio, Visceral Dance Chicago, and Dayton Ballet. She joined the University Ballet of Chicago as a performer, teacher, and choreographer; and was also an instructor, choreographer, production co-manager, and dance librarian at Chicago’s ARCC Ballet and Dance.

She said what resonated with her the most was the beauty coming from the spirit of the dancers.

“That beauty of spirit that comes—it is like glowing out of the dancers, almost. And it’s echoed in the costuming and backdrop. There has been just so much attention to the aesthetic. Ultimately, I feel that it is really that spirit and heart that the dancers and the artists bring forth in their performances,” Klimek said.

The dance teacher also praised the dancers’ artistry, saying that she was amazed by their technique and precision.

“I have done soloist and ensemble work and I am amazed how well the ensemble is able to stay together while they are doing this incredibly difficult movement. They really just move as one body and I love that,” she said. “In ensemble ballet, we call that the corp of ballet, the body of the ballet, meaning everyone moves as one person. I thought they executed that wonderfully, it was just gorgeous.”

She continued, “it had a lot of emotional impact and I just appreciate it so much because I think I know how difficult that is to do.”

The performance uses classical Chinese dance as its foundation but also includes several ethnic and folk dances from China’s many regions and peoples. Classical Chinese dance has a history of thousands of years and was passed down continuously within the imperial palace and ancient Chinese theater and opera. It was absorbed wisdom from every era and dynasty before becoming a complete system of dance embodying traditional aesthetic principles with its unique dance movements, rhythms, and inner meaning, according to the Shen Yun website.

Moreover, the dance movements of this system can bring out the inner meaning of intrinsic thoughts and feelings, reflecting the peculiarities of human nature, the standard for human conduct, moral concepts, mental state, and one’s value system. China’s deep cultural traditions are contained in classical Chinese dance, allowing its movements to be richly expressive, something Klimek appreciated.

“I thought so many of the dances communicated a lot of emotion and feeling through their movement and really drew you into the stories that they were telling,” she said.

“There were moments that were intense and sad, I felt like I was watching a film, being drawn into that. Then there were moments that were very elated and, as you say, almost divinely inspired. It felt very transcendent of those moments. Just any point in the story I felt like I was empathizing, feeling what the characters were feeling,” she said.