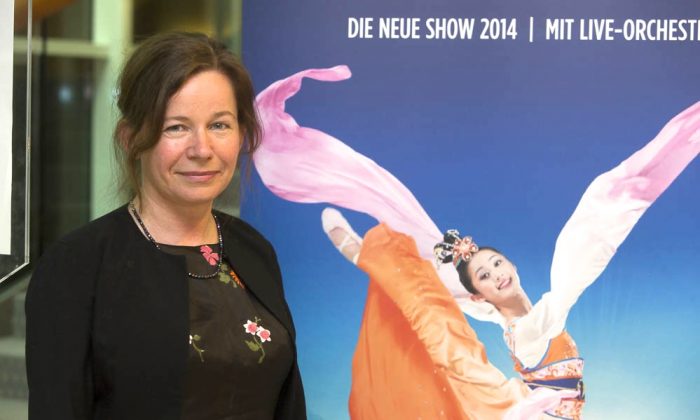 Ms. Beate Rohwetter, a painter, said that the Shen Yun performance at the Festspielhaus Baden-Baden, on April 30, was fantastic. (Matthias Kehrein/Epoch Times)

“The show was fantastic. I was highly impressed by the dance performances,” Ms. Rohwetter said.

“The projections on the backdrop harmonized wonderfully with the dance performances,” Ms. Rohwetter said. “It was quite unique when it appeared as if the performers came out of the backdrop onto the stage. That was done exceedingly well.”

“Animated backdrops transport the audience to another world,” the Shen Yun website states. “Projected behind the dancers, the hi-tech images lift the stage and set it amidst blossoming landscapes, deep forests, Mongolian prairies, or celestial paradises.”

Speaking of the colors throughout the show, Ms. Rohwetter said, “Being a painter, the colors were inspirational and express harmony.”

In her eyes, “the show brought harmony to its audience.”

Reporting by Nina Hamrle and Heide B. Malhotra