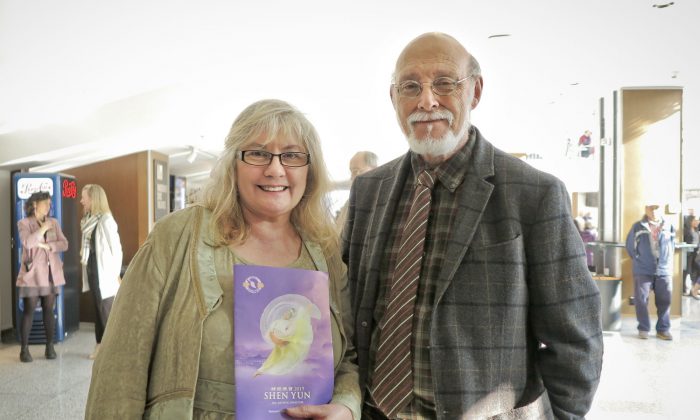 VANCOUVER—Painter and sculptor Abbey Blair-Brown was refreshed by the sight of a performance so unwavering in its goal of conveying purity and beauty through music and dance.

“I think it was outstanding, it was devoted, and it was really beautiful,” Blair-Brown said after watching Shen Yun Performing Arts at Queen Elizabeth Theatre in Vancouver, Canada, on March 23.

“It was fresh and it was clean … It was just a great experience.”

Traditional Chinese culture was deeply imbued with teachings from Buddhism, Taoism, and Confucianism. Values and ideas arising from such faiths have thus informed Chinese people’s thinking and way of life for millennia, and can be found within the stories passed down from generation to generation. These traditions continued uninterrupted until it was dismantled and denounced during the Cultural Revolution launched by the Chinese communist regime.

It was Shen Yun’s depiction of such spirituality through its songs and stories that impressed the artist.

“I liked the fact that there was a spiritual value to it, and an encouragement to living the right way, and to be cautious of modern ideas that may look attractive but really can lure people into a very dark place,” Blair-Brown said.

“The spiritual value I got from the show was to just be discerning and to place your mind on beauty and love and kindness and simplicity … Don’t be lured into different things, just keep your life simple and clean.”

The artist said that she herself considers these values associated with the belief in the divine in her daily life, and tries to reflect this in her art. So it was heartening to see Shen Yun proudly display aspects of the divine throughout its performance.

“It almost seems today that people have lost a sense, a grip of beauty and innocence and it was very wonderful to see that in this performance.”

Blair-Brown said that Shen Yun stood out in sharp relief against much of the art that we see nowadays.

“A lot of art [today] is very dark. As an artist, I have made a conscious decision not to be part of it. So it might mean I won’t be popular, but it’s my decision,”she said. “So I really like the freshness [of Shen Yun] and it was clean. That meant a lot to me.”

The artist applauded Shen Yun’s efforts to bring back ideas such as belief in the divine to modern audiences.

“I think we’re lost at the moment as humanity. There needs to be a giant awakening,” Blair-Brown said.

As to what she thought Shen Yun was trying to awaken in people: “To go back to purity. Pure thinking, simple, and be aware, be aware of what it is [that’s] going on.”