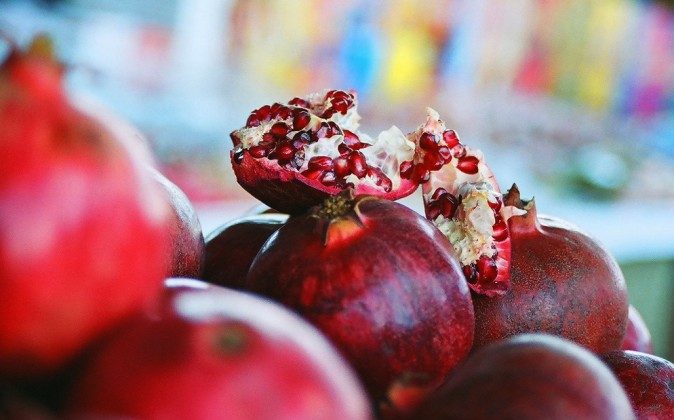 What Are Pomegranates Good For?

Pomegranates have been enjoyed for thousands of years and are a symbol of hope and abundance in many cultures. They’ve been found in Egyptian tombs, eaten by Babylonian soldiers prior to battle and incorporated into Persian wedding ceremonies to symbolize a joyous future.

It’s even been suggested that it was pomegranates, and not apples, that grew in the Garden of Eden. Pomegranate literally translates to “seeded apple,” but research shows pomegranates may pack even more nutritional punch.

In North America, they’re often overshadowed by more common fruits like apples and oranges, but once you learn how to eat them (it’s not as hard as you might think), this is one fruit that can add valuable nutrition, including antioxidants, to your regular diet.

Pomegranates Are an Antioxidant-Rich Superfood

The primary source of pomegranate’s benefits come from its antioxidant content, particularly ellagitannin compounds like punicalagins and punicalins, which account for about half of the pomegranate’s antioxidant ability. It’s also an excellent source of the antioxidant vitamin C, with one pomegranate providing about 40 percent of the daily requirement for this vitamin.

In fact, according to a 2008 study, which compared the potency of 10 different polyphenol-rich beverages, pomegranate juice scored top billing as the most healthful of them all.

Its potency was found to be at least 20 percent greater than any of the other beverages tested, beating out Concord grape juice, acai, and blueberry juice —three well-known sources of potent antioxidants. It beat them primarily because it contains the most of every type of antioxidant.

As long as you have these important micronutrients, your body will be able to resist cellular damage and aging caused by your everyday exposure to pollutants.

If you don’t have an adequate supply of antioxidants to help neutralize free radicals, then you can be at risk of oxidative stress, which leads to accelerated tissue and organ damage. Antioxidants may also help to lower chronic inflammation in your body.

In his book The Antioxidants, Richard A. Passwater, PhD, says that humans have one of the longest natural lifespans in the animal kingdom, most likely because of the wealth of antioxidants in our omnivorous diet – including from eating whole foods like pomegranates.

Pomegranates May Have Anti-Cancer Properties

Pomegranate’s antioxidant activity is known to inhibit cell proliferation and invasion, and promote apoptosis (cell death) in various cancer cells. In one study, pomegranate extract was found to inhibit the growth of human breast cancer cells by inducing cell death. According to the University of Maryland Medical Center:

“In test tubes, pomegranate extracts made from juice, rind, and oil slow down the reproduction of cancer cells and may hasten their death. Some extracts also help reduce blood supply to tumors, starving them and making them smaller. Most studies have focused on breast and prostate cancer cells. In one other study, pomegranate juice extract given to mice slowed down the growth of lung tumors. However, most of these studies have been in test tubes or in animals, not humans.”

At least one study in humans has yielded promising results, however. In men with prostate cancer, those who drank pomegranate juice significantly lengthened the time it took for their PSA levels to double (from about 15 months to 54 months).6 Men whose PSA levels double in a short time are at an increased risk of death from prostate cancer, so the results suggest that pomegranate had a powerfully protective effect.

Pomegranates or pomegranate extract may help reduce joint pain and decrease inflammation in arthritis sufferers, according to research published in the Israeli Medical Association Journal.

The antioxidants in pomegranates may also help to reduce inflammation that contributes to the destruction of cartilage in your joints, a key reason for the pain and stiffness felt by many osteoarthritis sufferers. One study even found that pomegranate extract blocked the production of a cartilage-destroying enzyme. Researchers concluded:

“PFE  [pomegranate fruit extract] or compounds derived from it may inhibit cartilage degradation in OA [osteoarthritis] and may also be a useful nutritive supplement for maintaining joint integrity and function.”

Pomegranates for Your Heart Health

There is evidence to suggest that the antioxidants in pomegranates also benefit your heart in a number of ways, including lowering systolic blood pressure (the top number in a blood pressure reading), slowing, and even reversing, the growth of plaque formation in arteries, and improving blood flow and keeping arteries from becoming thick and stiff.

According to the authors of a study published in the Proceedings of the National Academy of Sciences, mice that drank pomegranate juice reduced the progression of atherosclerosis by at least 30 percent. They noted:

“In this experimental study, we have established that polyphenols [antioxidant chemicals] and other natural compounds contained in the pomegranate juice may retard atherogenesis [hardening of the arteries].”

Leading erectile dysfunction drugs treat erectile problems by increasing nitric oxide (NO) production, relaxing your blood vessels, which increases penile blood flow. Pomegranate juice has been shown to protect NO and enhance its effects on certain biologic systems, which suggests it may be useful for helping erectile dysfunction, at least theoretically.

A small study that tested this theory in 2007 found promising, although not statistically significant, results among men with erectile dysfunction who drank pomegranate juice. However, the researchers believed there was reason to keep testing to see if a benefit does, indeed, exist:

How to De-Seed a Pomegranate in Three Simple Steps

While many of the research studies have looked into pomegranate juice, I strongly suggest consuming the fruit in its whole form instead. Not only will this give you added fiber (which is found in the edible seeds), but it will ensure that you’re not overdoing it on fructose, which is found in high levels in all types of fruit juice. If you’ve never eaten a pomegranate before you may be curious what part is actually edible, and what’s not. If you cut a pomegranate in half, you’ll find it’s filled with juice-filled seed sacs called arils (about 600 of them in an average pomegranate), separated by thin white (and bitter) membranes.

Arils are the “jewels” of the pomegranate, and they’re the part you’ll want to enjoy. Many people enjoy pomegranates alone as a snack, but you can also sprinkle the arils over salads or cooked dishes. Inside each aril is a crunchy fiber-rich seed. While some people spit them out, you can eat them whole, seed and all. So how do you get out the arils? The POM Council recommends this simple three-step process:

If you want to learn even more about what’s in the food you’re eating, visit our Food Facts library. Most people are not aware of the wealth of nutrients available in healthful foods, particularly organic fruits and vegetables. By getting to know your food, you can make informed decisions about how to eat healthier and thereby boost your brain function, lower your risk of chronic disease, lose weight, and much more.

Food Facts is a directory of the most highly recommended health foods to add to your wholesome diet. Its purpose is to provide you with valuable information about various types of foods, including recipes to help you maximize these benefits. You’ll learn about nutrition facts, scientific studies, and even interesting trivia about each food in the Food Facts library. Remember, knowing what’s in your food is the first step to choosing and preparing nutritious meals each and every day. So visit Mercola Food Facts today to get started.