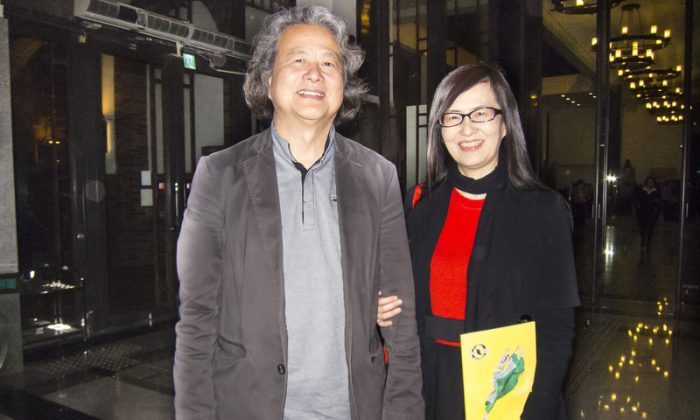 After seeing the performance, Shieh Yuan-fuh said, “I feel it [Shen Yun] is really wonderful. In particular, it is something special, to see the classical [Chinese] dance performed to the music played by a live orchestra blending Western and Chinese music instruments.”

Classical Chinese dance has a long history of thousands of years, passed down continuously within the imperial palace and ancient Chinese theater and opera. Soaking up profound wisdom from every era and dynasty, it has become a complete system of dance embodying traditional aesthetic principles with its unique dance movements, rhythms, and inner meaning.

As a vocalist, Lin Ying Ying was especially amazed by the live music performed by Shen Yun Orchestra. “Sometimes the music was played in Western styles, and it was mixed with the music played with Chinese music instruments at other times. But I didn’t feel any conflicts in it. They were synchronized seamlessly and naturally.”

The music for the piece “Defending the Throne” was composed to characterize several strong characters during the course of minutes, in a dramatic story. It fully demonstrated the arrogant disposition of a powerful general named Aobai, who had his eye on the throne.

Ms. Lin was deeply thrilled by the music. “I like Shen Yun music very much. In particular, when character of Aobai appeared [on the stage], the music was truly overwhelming.”

“The music was composed according to the plot, which fully portrayed the imposing manner of the character, and impressed me deeply,” she explained.

“To me, this is a magnificent performance which is not easy to come by, because the show combines classical Chinese dance with an orchestra that blends Eastern music instruments and traditional Chinese music, and every performer’s dancing skills are marvelous,” said Lin Ying Ying. “This is my first time seeing dance dramas performed along digital animated backdrops. This is indeed a well-knit program. In addition to music and dance, the overall synchronization and arrangements were perfect.”

Soprano Min Jiang’s two excellent vocal solo performances won tumultuous applause and resonated with Lin Ying Ying. She said, “Her performance was really wonderful. Her voice has penetrating effect. She seemed to transmit positive energy to the audience, and let them go home with the energy.”

Ms. Lin expressed that she has heard of Shen Yun’s popularity for many years, and she was delighted to appreciate Shen Yun in person today. She said, “It’s very enjoyable to see the show. I will share my feelings of seeing the performance with my friends and family. Those who haven’t seen the show should definitely come to the show.”