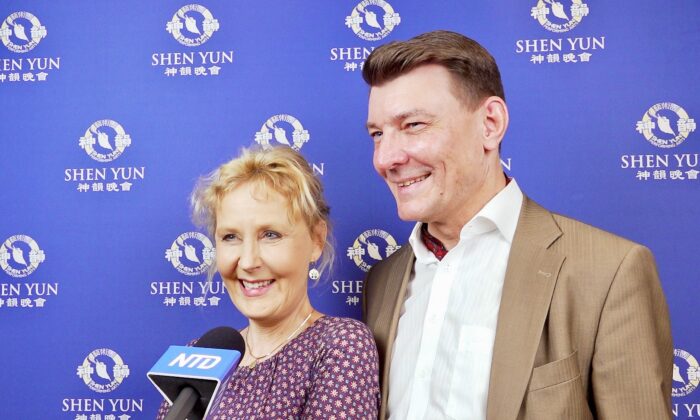 Britta Jacobus and Björn Peters at the Shen Yun Performing Arts performance at Jahrhunderthalle, Frankfurt, on May 31, 2022. (NTD)

FRANKFURT, Germany—Music is an integral part of every culture. Whether through song or instrumental music, Shen Yun Performing Arts is sharing Chinese culture with the world with its first-rate musicians.

“You notice with the musicians that they all have very, very high levels of individual artistry, and the conductor also brings it together wonderfully,” said Björn Peters, a physicist, and entrepreneur who also once studied singing.

Shen Yun is based in New York, and its live orchestra boasts a unique blend of a classical western orchestra with traditional Chinese instruments like the erhu and pipa.

“I also thought it was wonderful that individual Chinese instruments were added to the ensemble so that overall you get a European harmony, but with Chinese instruments—and that’s how culture is created! By mixing different influences. And as I said, on this level it is quite wonderful, we are very happy to be here tonight!”

Shen Yun’s singers are trained in the traditional bel canto style, the most natural form of singing.

Mr. Peters’ wife, Britta Jacobus, a freelance opera singer, shared that Shen Yun’s baritone, “was very good, he has a well-directed voice, a great range, good depth, it was all there.”

“It’s a bit different, it sounds a little different to me in terms of technique, as if the voice is a little bit further back in the throat. So it’s different from our singing technique, but definitely interesting and beautiful,” she added.

Music can often be a portal to another world. In the case of Shen Yun, its music connects the audience with the abundance of scenes, dances and stories.

Classical Chinese dance is the dance form utilized by Shen Yun. With a history longer than ballet, its influence can be seen in acrobatics, gymnastics, martial arts as well as ballet.

“[Classical Chinese dance] reminds me very much of ballet. I have no idea about this training, but I have observed the training of ballet dancers, and I am sure it is quite similar,” said Ms. Jacobus.