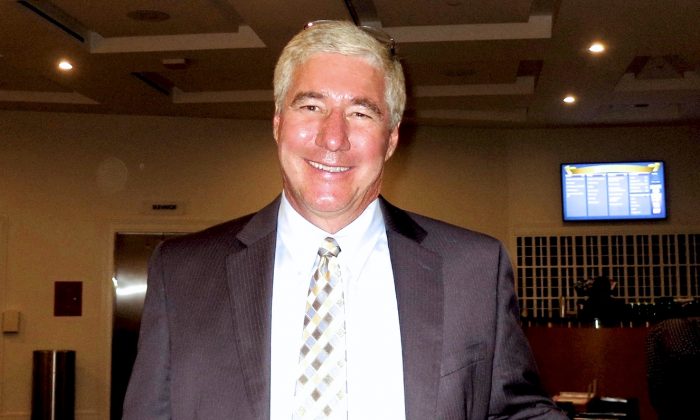 John Donahue attends the Shen Yun performance at the Belk Theater at Blumenthal Performing Arts Center on May 4, 2015 in Charlotte, N.C. (Epoch Times)

“I enjoyed everything. It is wonderful. I especially like the background views,” said Mr. Donahue who saw Shen Yun at the Belk Theater, Blumenthal Performing Arts Center in Charlotte N.C. on May 4.

Mr. Donahue said the views of the countryside in China, projected onto a backdrop screen, were magnificent. He always imagined big cities when thinking of China, but watching the ever-changing landscape scenery on the backdrop was “just peaceful, beautiful, gorgeous, spectacular.”

After bringing to life 5,000 years of traditional Chinese culture on stage for audiences to enjoy,
the world’s premier classical Chinese dance and music company, based in New York, had completed its 2015 world tour.

Mr. Donahue’s son plays the Chinese instrument pipa, so Mr. Donahue has an affinity for Chinese music. It was this connection that decided Mr. Donahue to go to the Shen Yun performance.

Vickie Wallis is a banker, her husband Al a meteorologist.

Mrs. Wallis really enjoyed the performance and thought it is was beautiful, she said.

“The music was beautiful, and so was the [pianist] who [accompanied] the singers. And the singers were really talented,” she said.

She also thought the backdrop was interesting and fascinating, she said. Mr. Wallis agreed and said the way the animations on the backdrop interacted with the performers was beautiful.

Mrs. Wallis said the values presented in the performance were “universal and broad based.” Mr. Wallis agreed saying he loved the spiritual aspects of the show in terms of how religion and beliefs were displayed and portrayed in ancient China.

Mrs. Wallis said she did get one main message from the performance: “kindness and compassion.”

Interior designer Rosa Dest went to the performance with her husband, Rich, who is a dentist.

“I think it is beautiful, it is graceful, the costumes are beautiful, the dancing is amazing, and I love the music too,” Ms. said.

Mr. Dest was amazed by water-sleeves, long flowing sleeves made to appear like rippling water, in the dance piece Sleeves of Grace.

“That was amazing, just how the sleeves come up in the air and bring it back in, it is graceful and beautiful,” he said.

As an interior designer, Ms. Dest said the color combinations of the costumes were beautiful, as well as the perfectly synchronized interaction between stage, dance performance and music.

“The backdrop, I think it is amazing, how their timing is right on target. To me the color combination of their costumes was beautiful,” she said.

The message in the piece The Power of Compassion made an impression on Mr. Dest.

He said the message was about “how when you are inflicted, you still want to give compassion to the person who inflicts you, which is a pretty strong message.”