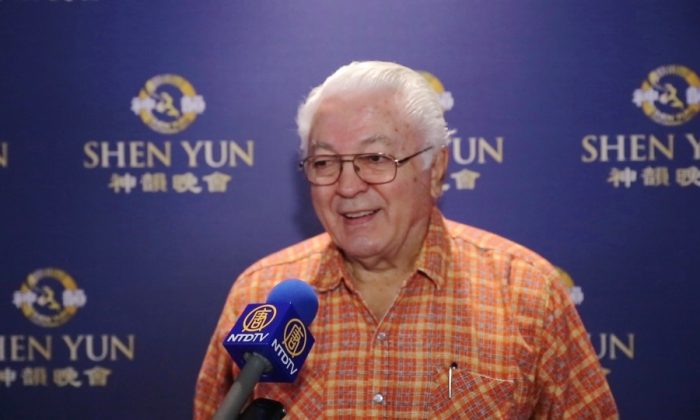 Edward Hare, who worked at MGM for 20 years, after watching Shen Yun Performing Arts Feb. 1 at Segerstrom Center for the Arts. (Courtesy of NTD Television)

“I have a background, for 20 some years, I was partner in charge of Metro Goldwyn Meyer audit,” said Mr. Hare. “So I’ve seen an awful lot of unique things. But I’ve never seen the special effects like [Shen Yun] had in the background in this show. Those were just truly outstanding!”

Shen Yun uses dance, music, costumes, and an animated backdrop to bring to life the myths and stories of China’s 5,000 years of culture.

Shen Yun’s website describes more fully the backdrop: “With state-of-the-art graphics technology, Shen Yun’s digital-backdrop team creates vividly animated settings, extending the stage and transporting the audience to a world where heaven and earth are one.

“These digital backdrop designs complement and synchronize all aspects of the performance: the characters, color of the costumes, specific dance movements, props, lighting, the story being told, particular notes played by the orchestra, and special audio effects,” the site explains further.

“I was very much involved with the entertainment industry,” continued Mr. Hare. “The background and the special effects here were over the top. They were just truly outstanding.”

He said he also enjoyed the music as well as the dance.

“Everything,” he said. “The whole show was just outstanding.”

All the spectacular visuals and dance and music contribute to telling the stories of China’s ancient past, and resurrecting its culture—the oldest continuous culture in the world today.

With that rich culture comes a lot of ideas.

George Covic, a screenwriter also at the Feb. 1 performance, noted, “I know other writers and even designers, clothing designers, come to see this show to get ideas for new clothing—even writers to just open up your mind to see different cultures.”

Shen Yun cannot be seen in China today because the current regime in China sees traditional culture as a threat.

“The biggest thing is that you can’t [have] this show in China. I mean, that’s sad – because the whole culture – [Shen Yun] can’t even take it in their own country,” said Mr. Covic.

Shen Yun website explains why it’s not welcome in China: “Forcing atheism upon society, the Chinese Communist Party has for decades launched various campaigns—most notably the Cultural Revolution—to destroy not only cultural sites, temples, and relics, but also the Chinese people’s belief in virtue and faith in the divine.

“The Chinese Communist Party removes the cultural essence of respect for the divine, thereby extracting the heart and soul of traditional Chinese culture. Shen Yun seeks to revive these virtues the world over,” the website continues.

One of the stories Mr. Covic found touching was one called The Power of Compassion.

This story centers on practitioners of Falun Dafa, a meditation practice that has been persecuted in China since 1999. In the tale, a practitioner who was facing persecution by a Chinese police officer turns around to help the officer after the officer has been badly hurt. The policemen then changes his violent ways.

“The compassion piece, I really like that piece,” said Mr. Covic.

The same piece also made an impression on Rich Callaci, a musician who attended the same performance.

“[It] brought out a lot of feeling [with] their passion,” he said of The Power of Compassion, “when they were talking about the principles of compassion – it was heartwarming.”

Of course, as a musician, Mr. Callaci also said he enjoyed the music. “I think it’s great. Very well written, and very well orchestrated,” he said.

Mr. Callaci brought his girlfriend, Robin Freeland, who dances and is a fitness trainer.

“I think the dance is fantastic. I cannot believe how flexible, mobile, how talented they all are,” she said.