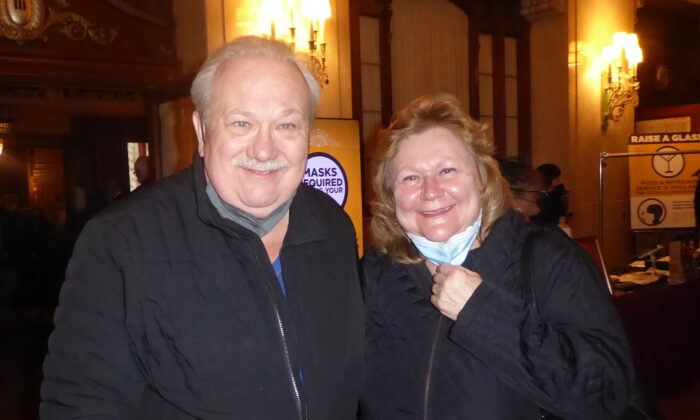 Mike Lynch and his wife at the Jan. 21, 2022 evening performance of Shen Yun in Pittsburgh, Penn. (Tony Dang/Epoch Times)

PITTSBURGH, Pa.—It’s the unique wondrous effect of the arts to transport us—in this case, from a frozen Pennsylvanian town to the elegant palaces of China thousands of years ago.

On the evening of Jan. 21, Pittsburgh theatergoers were greeted by the sights of an ancient civilization as presented by Shen Yun, the leading performing arts company centered on reviving the 5,000 years of Chinese culture before communism. Based in New York, the company made its debut in 2006 and has delighted audiences around the world since.

Physician Mike Lynch and his wife attended this performance and were filled with admiration for the performers and curiosity about China’s history.

We were just commenting on the grace and beauty and athleticism of the performers.
— Mike Lynch

“We were just commenting on the grace and beauty and athleticism of the performers,” said Mr. Lynch. “It’s really impressive.”

In each performance, Shen Yun presents a number of pieces that bring the audience to diverse places and times in China’s history: for example, the battlefields where soldiers trained with bows and arrows, palaces where ladies danced, or the fields during harvest time. The dance pieces offer an opportunity to sample the various styles of dance originating from China’s vast and diverse land.

“I didn’t know a lot about Chinese history and culture, and I think using the stories and the dance and productions to bring it to life really helps you understand I think a little more—not just the dates and the times but of the background and the culture of the people,” he said.

Shen Yun‘s mission is to open audiences’ minds to what China was like before the communist occupation of the last 70 years.

“I just have learned a lot more,” he added. “We understand that there is a lot more to thousands of years of Chinese history and culture than the last 70 years. I think it’s hard to know because it’s so distant, so to bring it to today and bring it to life helps us to understand it much better than we did, than we would have otherwise.”

John and Cathy Mary, respectively marketing director and CEO of their family’s electrical contracting company, were happy to see the performance after having heard about it for many years. They reflected on the contrast between the Chinese people’s culture and that of the communist regime.

“The show here was just amazing. And we enjoyed it very much,” said Mrs. Mary. “China’s a wonderful country. It’s just unfortunate for the people who live there that they live under an oppressive regime.”

Part of Shen Yun‘s program illustrates real-life examples of the struggles of modern Chinese life. Religious persecution is rampant in today’s China, and many of Shen Yun’s performers have experienced it first-hand.

Seeing the performance, Mr. Mary was brought back to his travels to China, and how the society there has changed.

“The culture that it shows—the belief in a higher power—[it was] very nice to see,” he said. “Me and my son went to China. … We spent about three, four weeks there. And we got the impression that the people there want to believe in a higher power, but the government doesn’t permit them.”

He continued: “Walking through the Forbidden City, you got the sense that there was a belief in a higher being. And that spiritual belief that doesn’t exist now. The Forbidden City is now just a place to go for tours. … We talked to people off the record that were very sad with what was happening in China.”