Shen Yun Performance Has ‘So Much to Absorb’ 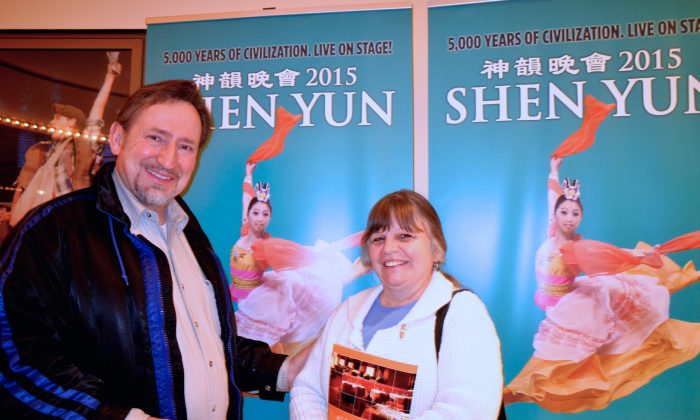 Terry and Patricia Winter enjoy Shen Yun at the Marcus Center for the Performing Arts on April 15, 2015. (Helen Peng/Epoch Times)

MILWAUKEE—”There is so much to absorb, I wish I had a DVD so I could watch it over and over and over,” said Terry Winter after attending Shen Yun’s final performance this season at the Marcus Center for the Performing Arts on April 15.

The parents of six and proud grandparents of 11, construction worker Terry Winter and his wife Patricia came out to see this evening’s performance of Shen Yun Performing Arts Touring Company and wished their family could have been there to see it too.

Mrs. Winter commented that the flowing movements of the dancers were gorgeous and absolutely breathtaking, while her husband noted how amazing and spellbinding the vocalists were in their ability to fill the whole hall with their voices.

From the performance, what really meant a lot to Mr. Winter was the spiritual aspect of Shen Yun along with the message of freedom. “I was very impressed with their dedication, how they presented the suppression of Chinese culture in their own homeland and elsewhere in the world [where] it’s free [to express] but not in their homeland. I had a lot of sympathy for that, it touched me, it was really special to me.”

Mr. Winter was referring to a segment of the performance that depicts the suppression of freedom of expression/belief, namely the ongoing persecution of practitioners of Falun Dafa by the communist regime.

Falun Dafa (also known as Falun Gong) is a peaceful traditional meditation practice based on the guiding principles of Truthfulness, Compassion, and Tolerance.

Also in the audience tonight was financial adviser, Connie Carmony and her niece Ashlynn.

Ashlynn commented that they really like the dance [The Power of Compassion]. “It’s moving to me because it is happening in China, because I didn’t know it’s happening so it made me feel sad for people that it happened to,” she said.

“It was really good. I really liked it,” was Ms. Carmony’s reaction to the same piece.

Ashlynn said she’d tell her friends about some of the things she learned about China today, and how they don’t share the same freedoms as the US.

She said, “These days in social studies, we are talking about what is happening in China today, so I am going to read the [program] packet talking about each dance style.”

Would Ms. Carmony recommend the performance to her family and friends? “Absolutely,” she said. “They should come, it’s very beautiful.”