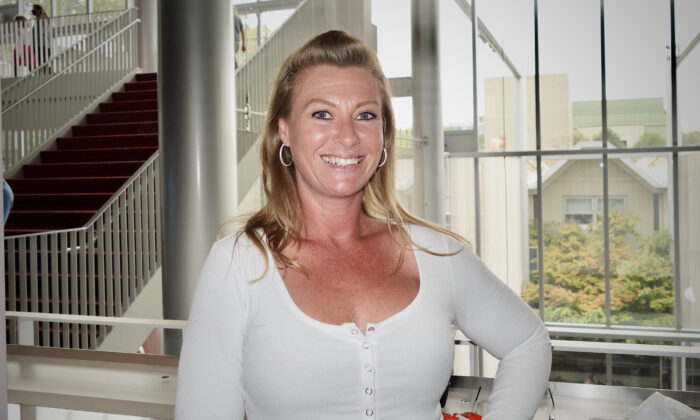 SEATTLE—Robin Brumley’s chance to watch Shen Yun Performing Arts at the Marion Oliver McGaw Hall in Seattle on Oct. 3 was a wish come true, she said.

“I’m absolutely loving it,” said the dance instructor and owner of Winlock Dance Center. “The costumes are colorful and very detailed. The way that they complement all of the dancers’ movements is just impeccable.

I’m loving the music—there’s nothing like watching a show with a live orchestra.
— Robin Brumley

“I’m loving the music—there’s nothing like watching a show with a live orchestra. It makes such a difference, in the audience’s perspective,” she added.

At her dance center, Brumley teaches children jazz, tap, ballet, and hip hop. As a result, she was keenly interested in the different techniques and styles used by Shen Yun’s dancers.

“I’m really enjoying seeing the differences but also seeing the similarities because dance crosses over that way,” she said.

Several of the dances presented by Shen Yun originate from China’s provinces or powerful dynasties.

“We got goosebumps,” Brumley said, describing how she felt after watching the “Water Sleeves” and “Plum Blossom” dances.

China’s traditional culture was largely destroyed in 1949 when the Chinese Communist Party banned or burned traditional texts and artworks, and persecuted or murdered those from the many ancient lineages of spiritual traditions.

Shen Yun’s mission is to bring to life “China before communism” and to present the authentic history of the Chinese people.

“It looks like a very beautiful, hopeful, positive place [and] I’d like for it to be that way for that community again because it looks like a paradise. I’m very much enjoying learning the cultural side [of China’s history] and [I’m] enjoying the dance too,” Brumley said.

Brumley said she strongly believes that Shen Yun has the power to lift people’s spirits.

“I’m sure you can probably tell from your ticket sales that people are excited to get out and finally see live shows because it’s not the same watching it on TV. You really do feel the happiness and the emotion and the passion from the dancers.”

“I think being here, and seeing [the performers’] love and their happiness, makes everyone leave the theater today feeling positive, and [feeling] that they came and saw something beautiful and supported something that they want to keep going,” she said.

Brumley heard about Shen Yun when she was living in San Diego, California, and had waited years to see it.

“And now that I moved to Washington, I said, ‘You know what? I’m going to finally come to see the show.’ It’s like a bucket list, check it off my list. And I’m so glad I did.”

Brumley said she would recommend the performance to her family and friends, giving Shen Yun a “ten out of ten.”