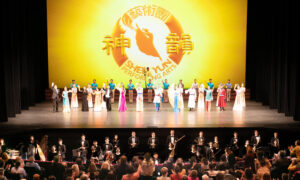 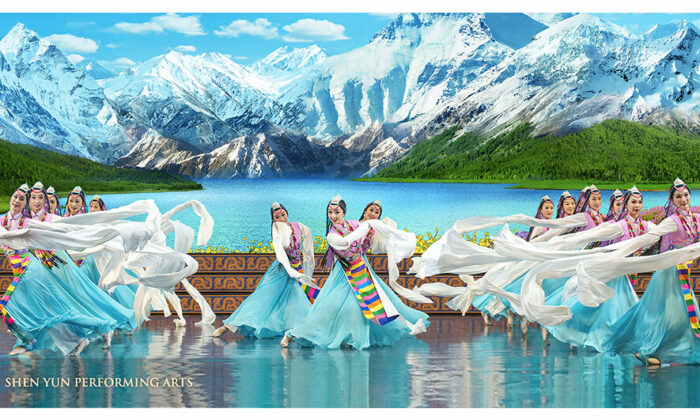 Rooted in tradition and honor of the divine, the performance presents the best of classical Chinese culture
By Catherine Yang

In order to see some of the best art of Western civilization, you have to look up.

On the ceilings of palaces and churches are sweeping scenes of the heavens, of allegories and saints and divine beings in all their magnificence—feats of technical and technological innovation, a mastery of skill coupled with a flourishing of human creativity and imagination that rivals anything invented today.

Most famous of them all, perhaps, is Michelangelo’s fresco on the ceiling of the Sistine Chapel. Rather than a scene of heaven, the story of humanity plays out across the center panels of the ceiling, from the creation to the fall to the salvation of man, with semidivine onlookers observing from the corners.

Art at its best touches our humanity, answering our deepest questions, helping us to find meaning in life.

“You think, ‘What would heaven be like? If there was a heaven, what would that be like?'” said Jared Madsen, a longtime emcee of Shen Yun Performing Arts, a New York-based classical Chinese dance company. “This seeking for the divine, seeking for something higher—that’s really what you see throughout a lot of Chinese culture and throughout a lot of our performance.

“These are things I think every human is thinking about, that we’re all wondering about. And we get to actually see this on the stage—it’s amazing.”

Madsen is referring to a unique—and patented—production element of Shen Yun, which presents Chinese culture from before the advent of communism.

Scenes of celestial palaces, of the Creator coming down to set into motion 5,000 years of civilization, of divine beings coming to the aid of the good and faithful, of human beings from history to modern-day grappling with these deep questions relating to the purpose of life—all of these become a living work of art rendered in expressive dance, brilliant costumes, and a digital backdrop that extends the screen into the cosmos. Shen Yun brings together the kind of brilliance in imagination and mastery of skill and technique that is required to form a masterpiece.

“It is a cultural show but at the same time it goes much deeper than that. … It connects to something at the root of humanity,” Madsen said.

This is the authentic, traditional Chinese culture that the CCP doesn’t want you to see.

The Truth About China

Shen Yun’s mission is to “revive 5,000 years of Chinese civilization,” according to the company’s website. The ancient Chinese believed that this civilization was divinely inspired, passed down from the gods, and they kept it intact for five millennia—until the bloody communist coup in 1949. And after the CCP took power, it launched the Cultural Revolution, which rooted out traditional culture by smashing temples, burning books, and brutalizing innocents. All told, the CCP’s rise to power resulted in at least 50 million to 60 million deaths.

Much was lost, and the culture in China under the communist regime was warped, but the historical legends, myths, and characters lived on in the memories of some in China and abroad. In 2006, artists from around the world—including some who fled China—came together in the land of the free to form a company whereby they could express a culture that was all but lost, and present it on the world’s stage.

Traditional Chinese culture is rooted in divine thought, Madsen says—Buddhism, Taoism, and Confucianism. Central to the culture is respect for the divine, and the belief that good people are blessed and evil is punished.

This holistic view of humanity is what initially drew Madsen’s interest in Chinese philosophies, back when he was in high school. In our modern-day, technology-dependent, and largely secularized world, questions about where we come from, the purpose of life, and what awaits us beyond aren’t ones that are explored in day-to-day conversation. But Madsen found some answers—sometimes to questions he hadn’t even imagined—in the ancient philosophies that he began to read, and he developed a great fascination for China.

“And then I went to China,” Madsen said. This was in the 1990s, and the reality was bleak. “I quickly realized these amazing things that I was reading about in various books about Confucianism and Taoism—right at the very moment I landed in China, it was a wakeup call: ‘Oh, this is a communist society.'”

In a sense, when Madsen encountered Shen Yun, it was like coming home.

Beauty That Lifts the Soul

Dante, the poet supreme, wrote that beauty awakens the soul to act.

Shen Yun principal dancer Evangeline Zhu feels the same. Beauty is not just pleasing to the eye. A pure and transcendent sort of beauty, what the medieval and Renaissance scholars and artists might refer to as objective beauty, or what the Romantics might call the sublime, can move the soul.

“There is a crucially important aspect of art, and that is its aesthetic principle,” Zhu said. “What is beauty? What isn’t beautiful? The arts are all about beauty, but the particular standard of an art form is very important.”

“But, in today’s world, people don’t agree on what is ‘beautiful.’ We say it’s in the eye of the beholder, or it’s my taste. Given that, I think the mind and moral understanding of the artist is as important as their skill.” To express transcendent beauty, the artist must seek to understand what it means.

Shen Yun takes this quest of understanding beauty seriously; its very name means “the beauty of divine beings dancing.” Even the costumes—couture embellished with more detail than any audience member will ever fully catch—are done with respect to authenticity, created after the dynastic dress that was said to be inspired from the heavens.

“For me, the form of art that can broaden people’s minds, that can evoke their humanity and move their hearts toward kindness, that’s beautiful,” Zhu said.

Classical Chinese dance is famously expressive and lends itself well to storytelling through dance. Shen Yun’s performances include around a dozen storytelling dances, each set to an original composition of ancient Chinese melodies performed by a Western classical orchestra, with a few Chinese instruments mixed in. These tales tell of love and heartbreak, of joy and tragedy, the relationship between a parent and child, and of heroes demonstrating honor and courage as they defend their people. Zhu has seen many an audience member moved to tears through her performance.

“Dance is a form of communication,” she said. “It transmits something beyond language, and through the senses, you communicate and impress upon the audience something profound.

“What are you going to communicate? … I think this is important for an artist to think about.”

What those audience members tend to leave with are inspiration and hope.

Recently, after a long hiatus, people who had planned to see Shen Yun perform at Lincoln Center, only for the shows to be canceled mid-tour because of the pandemic, finally got the chance. In Stamford, Connecticut, on June 26, Shen Yun kicked off a new season.

“It’s very spiritually uplifting,” Chris Fiene, an engineer, said. “After the pandemic, it’s very joyful to finally experience a show with other people and see them enjoy it as well.”

John Connor Blow walked out of the theater with his arms raised, expressing his gratitude. “I was moved to tears in joy,” said Blow, who had dreamed of seeing Shen Yun all last year. “And it’s changed my life.”

“You can feel a connection from me to the dancers and the situation they’re trying to portray. I feel wonderful. It’s an incredible experience,” said Diego Mansilla, a professor at the University of Massachusetts. He and his wife, Adel, had waited nearly three years to see Shen Yun, prolonged by the pandemic, but it was worth the wait.

Some of Shen Yun’s dance pieces portray tragedy, but also the triumph of the good of humanity, Diego said. No matter the adversity depicted, the ending of each story brought goodness and hope.

Adel said this was something that would stay with them in their daily lives, a reminder “to make sure that this bad side never wins inside of us … [and] that the goodness they [the performers] show—to keep it inside of me and make the conscious choice that I don’t want to be with the bad forces.”

“They’re doing so much to show it to us, to inspire … this authentic purity,” she said. “How can I come home and be mad about things? I can’t. … I feel like I’m responsible now to continue what they gave us. They gave with so much effort.”