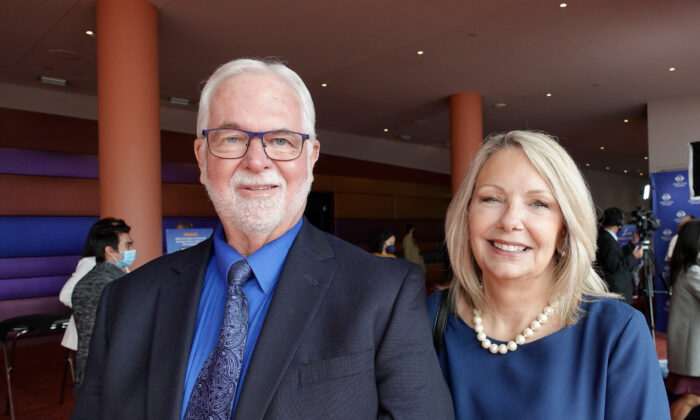 SEATTLE—Lynwood Councillor Jim Smith and his wife Sherry had their first opportunity to enjoy “China before communism” with Shen Yun Performing Arts at the Marion Oliver Hall in Seattle on Saturday.

“[It] has you on your seat from the very beginning,” Jim said.

Jim is the owner of an entertainment corporation, and sings and plays the guitar.

“This is much better than [I could have] ever expected,” he continued, explaining that he has been involved in the entertainment industry for decades and was overwhelmed by the performance. “It is beyond excellence.”

Sherry said she was mesmerized by New York-based Shen Yun. “[The] costumes are just amazing … the music is wonderful, the storytelling, we can understand the story. [It] is just fabulous,” she said.

“It’s so uplifting,” she said, “and it’s so nice to see people again out [after the pandemic] and enjoying [Shen Yun].”

She was particularly impressed by the dancers. “Just the way they move, the way they flow through the stage—it doesn’t look like they’re … even trying,” she added.

Jim enjoyed the variety in Shen Yun‘s performance and its presentation of the different geographic regions of China. Shen Yun portrays an authentic picture of China as well as the “hearts of the people of China,” he said.

He and Sherry also sang praise to Shen Yun’s mission of restoring China’s ancient culture, which has been suppressed and largely destroyed after the communist party take over in 1949.

It’s the art of dance, and I think that it’s very important for our upcoming generations to learn these dances and continue their traditions and their techniques.
— Sherry Smith

“[It] is a culture that must be revived and I am so grateful to know that is what’s being done here. We wish our grandchildren were here to see this. As much as I think that I know what’s going on in the world, it is a surprise to me that just tonight, I’m learning about how this [traditional culture] is suppressed so much in China,” Jim said.

While Shen Yun portrays stories of historical significance, legends, and comedy, it also present vignettes about the strength humans find in upholding timeless moral values. In particular, Shen Yun presents the story of Falun Dafa, a spiritual group that has been persecuted by the Chinese regime since 1999 for its promoting the values of truthfulness, compassion, and tolerance.

A Wonderful Path in China

Jim, who is currently taking part in a mayoral contest, said that Shen Yun has also given him new insight and a deeper understanding of China that will be helpful in his campaign.

“I think that [Shen Yun] wakens you up and shows that there’s not only a wonderful path in China, but it’s a beautiful future for everyone throughout the world,” he said.

The company is also portraying China as a part of the world that everyone needs to understand, he said.

“I see nothing but positivity [in Shen Yun.]. There’s so much that we’re learning, it’s … enlightening.

“I want to be able to say ‘Yes, there’s not only hope but there’s a bright future ahead.’ Whether it be myself, my family, people from other countries, we can all come together because we are all in this together.”