Shen Yun ‘Is a Once-in-a-Lifetime Experience’ 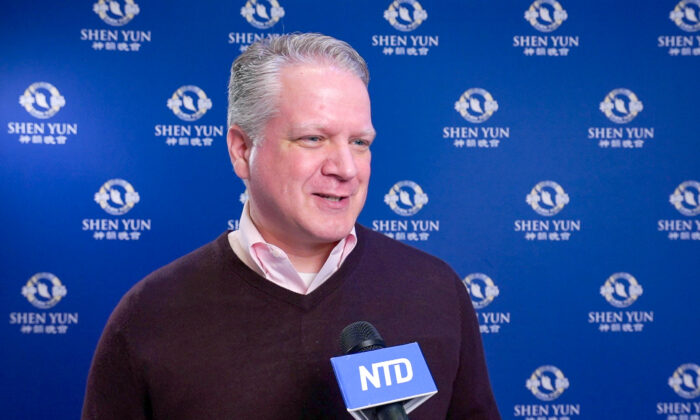 Walker is a financial advisor who works for the Bank of Utah Investments Center. He loved seeing New York-based Shen Yun, felt grateful that they chose to come to Salt Lake, and even lamented the fact that the show he saw that evening could not be seen again once its  2021 season begins next year because it creates all-new choreography, stories, and music each season.

“I loved the colors, the pastels. And the costumes were beautiful. I loved the way that the dancing was so flowing and energetic, how it seamlessly brought together the strength of the Chinese culture and yet at the same time brought together the beauty of it as well. I really enjoyed the performance and the music,” Walker said.

“It really moved me. I was really moved by the performance. … The persecution one … I found that very moving,” he added, pointing out one particular story.

Walker’s initial feedback about Shen Yun almost completely describes the company’s mission, which is to revive China’s traditional culture, from its ancient heavenly legends to its modern-day spiritual practices that espouse moral principles and divine beliefs. The portrayal of persecution Walker refers to is contained in a few of the vignettes Shen Yun presents. Ever since the Chinese Communist Party came to power in 1949, they have sought to wipe out China’s authentic spirituality. This effort continues with the persecution of Falun Dafa practitioners today, which Shen Yun includes in its storytelling dances.

Walker related to these stories of persecuted faithful and recognized it as a deeply human experience.

“It’s very moving. It’s a very moving art form. I think that when you touch the human heart in a way that other cultures… it brings people together because they, we all have human experiences. We’re all part of the human family and I feel like when the spiritual part is brought into a performance like it is in Shen Yun, it really is a moving experience. I was really moved by it.”

“I’m sad that I don’t get to see the same performance next year because I hear that every year they change their performance and update their choreography. And that’s an amazing thing that they can do that every year,” Walker said.

“I was amazed that they were able to incorporate it so seamlessly,” Walker said about Shen Yun’s orchestra. “I didn’t hardly notice it except when I looked down at the orchestra box and saw the unique instruments there and saw how well that was brought into the performance.”

Lastly, Walker was deeply touched by Shen Yun’s spiritual themes and ideas. Acknowledgment of the Creator and the legend that He’ll one day return to earth appears in Shen Yun since its artists carry on that ancient Chinese belief.

“It was remarkable. I’m a very spiritual person and I think a lot of people are spiritually connected in one way or another. Especially through their chosen religion,” he said, adding that he found it remarkable to see unique connections between the ancient Chinese spirituality and his own church and religion.

Walker said it was a joyful realization for him. “And the fact that it was brought through music as well as dance, was a very moving experience for me.”

“I think this is a once-in-a-lifetime experience and I’m so grateful that Shen Yun took the time to come out here and present it to Salt Lake.

“I’m grateful that they are able to take parts of the ancient culture of dance, and tumbling, and music and instruments and bring it all together into one great act,” Walker said.