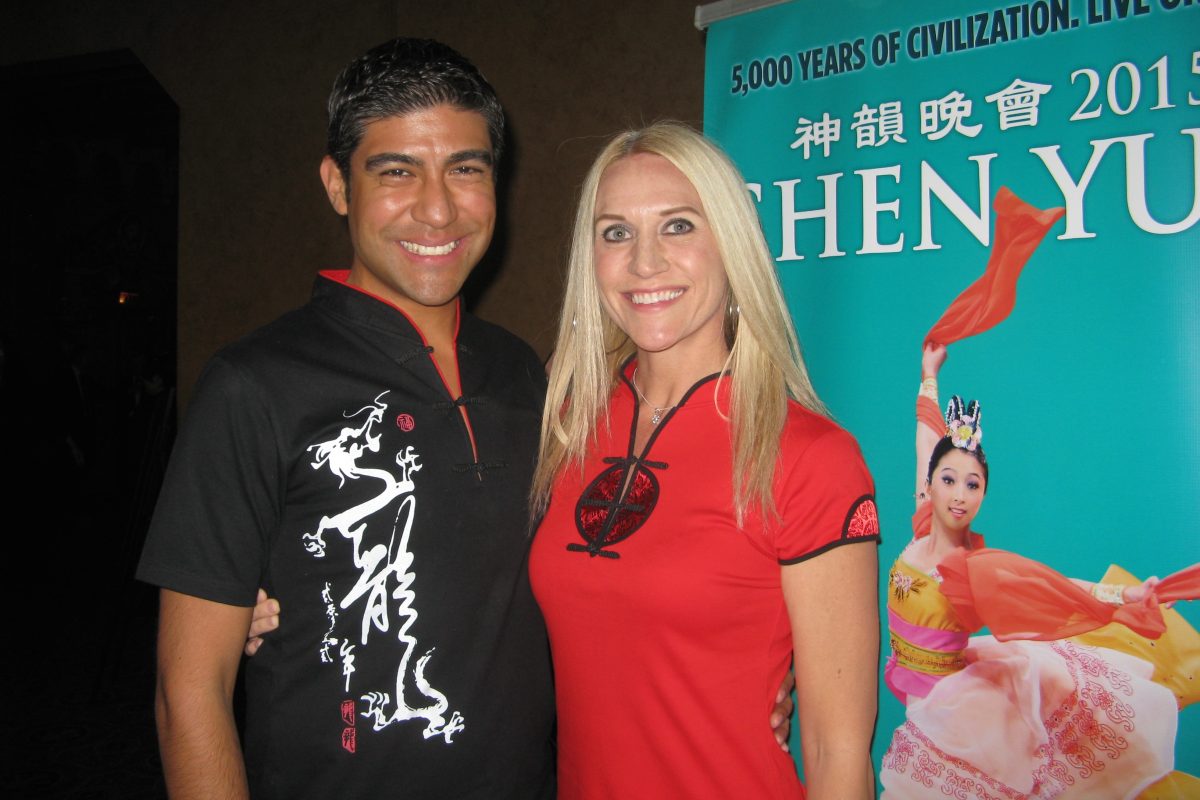 Shen Yun, ‘I was in complete awe the whole time’

PHOENIX, Ariz.—”I was in complete awe the whole time,” said Peggy Killian, a pharmaceutical sales representative, who attended a Valentine’s Day performance of Shen Yun Performing Arts with Miguel Castillo, a mechanical engineer for NASA, at the Phoenix Orpheum on Saturday.

“It was wonderful,” said Mr. Castillo. “It was such a beautiful show and such beautiful representation of Chinese culture.”

“It’s a very unique way of taking us to China for two hours, and then bringing us back to end the evening, just in regular old Phoenix,” he said, laughing.

Mr. Castillo, who is visiting from Houston, has been a lead engineer at the National Aeronautics and Space Administration (NASA) Johnson Space Center for more than five years. He develops, tests, and certifies space hardware, and also creates inventions that help protect astronauts from the harsh environments of space, some of which can be found on board the International Space Station today. He is currently in the selection process to become a US astronaut.

“I thought it was amazing,” said Ms. Killian. “It was phenomenal, the talent of the dancers.”

Ms. Killian said the dancers seemed to just float across the stage effortlessly. “I could watch them all night. They are so beautiful, they are graceful, and they make it look so easy.”

She especially enjoyed the interaction between the dancers and the backdrop, saying the performers seemed to be floating in the sky one moment, then all of a sudden they came down and appeared on the stage.

“I just thought that was so creative and so magical,” she said.

Shen Yun uses state-of-the-art graphics technology to create vividly animated digital backdrops, “extending the stage and transporting the audience to a world where heaven and earth are one,” says Shen Yun’s website.

Mr. Castillo was deeply touched by the spiritual traditions of Chinese culture and the depiction of these virtues and values.

“It’s feeling almost at home,” he said. Mr. Castillo himself is also a teacher of Eastern philosophy and an inspirational speaker.

“Since ancient times, Chinese people have believed that divine beings, throughout various dynasties, transmitted China’s rich culture to humans,” states the Shen Yun website. “In particular, the three main religions of Confucianism, Buddhism and Daoism have been at the heart of this heritage. They have inspired spirituality and faith, while fostering reverence for values like benevolence, justice, etiquette, and wisdom.”

“The aspect that touched me the most was any time they introduced Buddhism, either the monks, or the temples or Buddha himself,” said Mr. Castillo. “I believe there was a personification at the end of the performance. Just bringing that, capturing the magic of that philosophy is always, to me very striking.”

Mr. Castillo was aware of the posture of heavenly beings carrying a certain meaning, and he observed the depiction of the Lord Buddha in the Shen Yun performance holding his right hand down in a gesture of blessing to the world.

“So to me, it was actually a spiritual practice being here tonight,” said Mr. Castillo, who said he felt the blessing very strongly.

“It was not just a show again to me. It was actually a living meditation,” he said.

Ms. Killian agreed with Mr. Castillo about the powerful effect of the traditional Chinese principles, and she was also interested to find out that Shen Yun could not be seen in China today.

“I’m curious to know why and know more about the culture,” she said.

“I’m grateful to the production for bringing that and also letting people know that even in today’s world, there’s still not that freedom of speech or freedom of thinking,” said Mr. Castillo.

Another part of the program that Mr. Castillo thoroughly enjoyed was a dance sequence that portrayed the virtue of compassion. Practitioners of the spiritual group Falun Dafa are beaten by police, but when one of the police officers become seriously hurt, Falun Dafa practitioners help him and take care of him.

“To see them present the persecution of the culture and see a person transform from hatred to appreciation of this culture, it was such a beautiful thing,” said Mr. Castillo.

“We also need to be open minded about these beautiful teachings that have been there for thousands of years and how they not only impact society but they also impact us at the level of the being. The religions Daoism and Buddhism, etc. teach their life principles to incorporate into our daily lives to become better people.”

Mr. Castillo said that as a scientist, to him spirituality and science are simply two different ways of studying the same thing.

“Whenever we discover something, we only discover more about ourselves. That’s what science is pursuing, and that’s exactly what religion and philosophy are pursuing as well.”

Mr. Castillo said he also observed these revelations in Shen Yun, and the performance was able to capture the spirit of these spiritual ideals not only abstractly, but in a way that could be seen with the eyes.

Ms. Killian said she would definitely tell her friends to come see Shen Yun next year so they could immerse themselves in such an ancient culture. “I’m sure they’ll appreciate it,” she said.

Mr. Castillo agreed, saying it was not only educational, it was also beautiful.