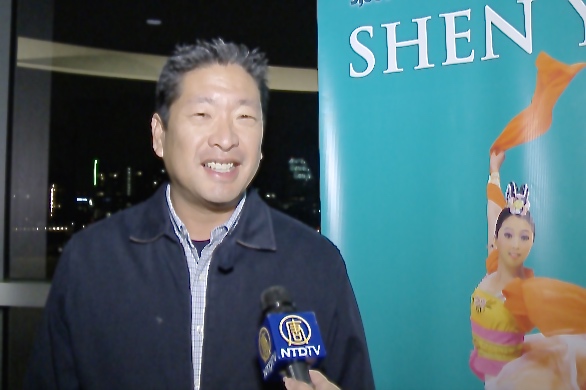 Paul Kim at the Long Center for the Performing Arts on Dec. 27, 2014. (Courtesy of NTD Television)

AUSTIN, Texas—Paul Kim, an entrepreneur and board member at the Long Center for the Performing Arts, has been attending Shen Yun Performing Arts almost every year the New York-based classical Chinese dance and music company has been coming to Austin, missing the performance only once.

“I am so ecstatic to have such a high caliber Asian art group visiting the Long Center and having an opportunity for Austinites to experience this art form,” Mr. Kim said after attending the performance on Dec. 27.

“It has tremendous energy and elegance that’s represented on the stage. It’s just a great show overall, good for the whole family.”

Mr. Kim, an engineer by training, has been involved in a number of business ventures, and is currently the president of the ATX Environmental Solutions. He is also involved in many community organizations, and holds executive positions in the Network of Asian American Organizations and the Asian American Resource Center, and is a board member at the Long Center for the Performing Arts.

Being of Asian background himself, he said he commends Shen Yun for presenting China’s traditional culture to audiences in the United States.

Based in New York, Shen Yun was formed in 2006 by a group of leading classical artists with a mission to revive China’s divinely inspired culture. Shen Yun has since grown to boast four different companies that tour the world simultaneously each year with a completely new program, presenting audiences with breathtaking performances of classical Chinese dance and music.

“Every year, I see the intricacy … and just think about how much work goes into putting on a production like this,” Mr. Kim said about Shen Yun.

“I have such a great appreciation for it, not to mention that it’s just a visual treat to watch them perform what they do on the stage.”