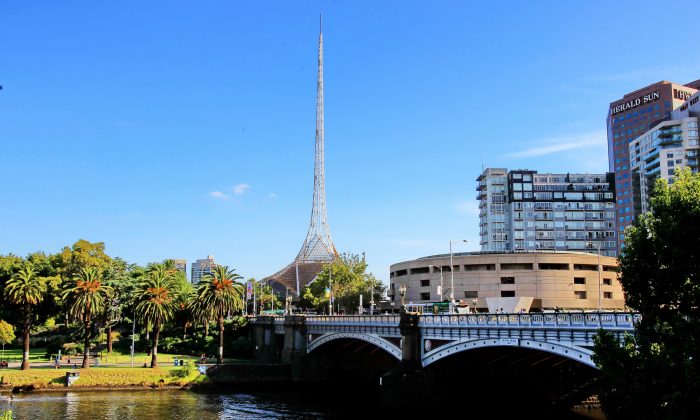 People in the audience spontaneously applauded the internationally-acclaimed New York-based classical Chinese music and dance company at the first of five performances that will run through Feb. 28.

Shen Yun was conceived in 2006 by a group of talented Chinese artists who decided to bring back China’s 5,000-year-old divinely-inspired culture, all but destroyed under 65 years of the Chinese Communist Party rule.

In the audience, Max Graham, a retired chiropractor, osteopath and a clinical hypnotherapist, said he has spent his life entertaining, as a comedian and actor of theatrical plays, such as Paint Your Wagon, Oklahoma and Jack the Ripper. He said he had shed many tears throughout the evening’s performance.

“I’ve been in many shows and that to me, that [Shen Yun] is perfection. Absolute perfection!” he said.

“It was so stimulating, so emotional, so beautiful … the most beautiful thing I’ve ever seen. I had tears in my eyes, many times.”

Anyone who has seen Shen Yun cannot help but be touched by the dance depicting the persecution of a peaceful meditation practice, Falun Gong, The Power of Compassion.

Falun Gong, also called Falun Dafa, continues to be banned in China under communist rule but is freely practiced in many countries around the world. China also refuses to allow Shen Yun to be performed there.

“They don’t like to show the history, 5,000 years of Chinese culture,” Mr. Graham said.

Mr. Graham said he was touched by the drumming. “The male drummers, that was truly exhilarating,” he said.

“Tonight was just unbelievable. I’m going away from here enlightened.”

Elizabeth Nguyen originally from Vietnam loves Shen Yun every time she sees it, but this evening the performance stole her heart and spirited her away to another realm.

“I disappeared, but I’m in the show … I enjoy it so much that I feel like I disappeared,” she said. “It’s excellent. I love Shen Yun.”

Ms. Nguyen is the co-owner of ‘Two Sisters Restaurant’ in Sunshine, says she loves to dance and was part of a Vietnamese dance group in Melbourne, the Au Co dance club.

She said the dancers were beautiful and nice, and that they could fix all the problems in the world. “They give everyone love, the love can fix everything,” she said.

She felt Shen Yun had the ability to bring love to the world and cure all problems.

“We may be different country, but we are one. We’re in one world, we can share everything we have with everyone, and make everyone happy. When I’m in the show, I can feel that the bad things can be fixed … I love Shen Yun.”

‘Taoism, Confucianism, the power of meditation’

“It was absolutely fantastic because it is so different to anything else I have ever seen and just the choreography and the background, and the use of the background was so … I was amazed seriously,” said Terry Cranage. “It was fantastic.”

The Shen Yun website explains, “Principles such as benevolence and justice, propriety and wisdom, respect for the heavens, and divine retribution, all come to life, washing over the audience.”

Mr. Cranage, is CEO of Cranage Corp and a lean business advisor for Vative and Lean Six-Sigma. He said, “It [Shen Yun] opened my eyes to the spiritual past of China and I was really taken by it and very interested … lots of parallels we picked up on.”

“The depth and beauty of the culture, and the profound spirituality which is embroidered into every aspect of it, not just the art but the philosophy, way of living, it was just remarkable,” she said.

Ancient China ‘ahead of its time’

Groundsman Robert Savedra and his wife, an orchardist Danielle Bonnett marked their 19th wedding anniversary at the Shen Yun performance.

“The music, the orchestra is superb, and I like the projection on the back, and the way they brought the characters to life, but also animated on the screen. So it looks so much bigger,” Mr. Savedra said.

Ms. Bonnett said, “The brightness and the vividness of the colour of the costumes are lovely. I think that the male dancers are exceptional, their acrobatic tricks and facial expression is fantastic.”

Mr. Saveda said the dances appeared contemporary, but were in fact thousands of years old.

“So, [ancient China] was ahead of its time. The history of the acrobatics, and the flips and twists, and turns that you associate maybe with the Olympics or whatever, is part of the Chinese culture from years ago.”

Mr. Savedra continued, “The spirituality and the deepness of contemplation, meditation, and the well-being of not only being physically fit, but also being emotionally fit as well.

“The narrators are really lettings us know about the stories, and then we’re learning along the way about the culture, the very deep-seated culture that they’ve got… it’s very educational.”

“The importance of compassion and forgiveness. Truth!” she said. “It’s important to keep those traditions going through time.”