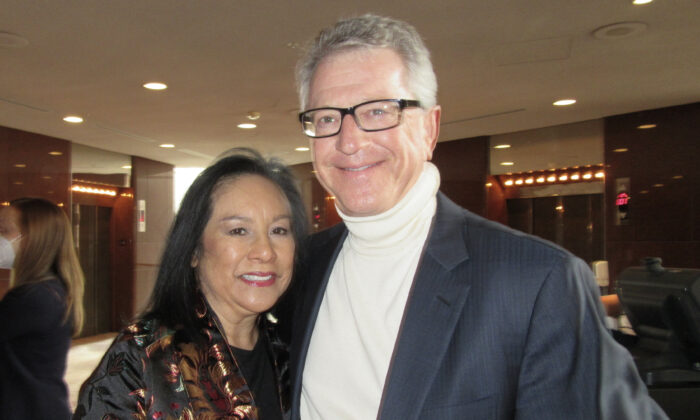 COSTA MESA, Calif.—It was New Year’s Eve at the Segerstrom Center for the Arts, where Shen Yun Performing Arts presented for the last time in 2021. Richard Denzer and his wife finally had their opportunity to see the world’s premier classical Chinese dance and music performance after waiting many years.

“The performance was wonderful and really enjoyable,” said Denzer, an architect and developer. He is the founder and owner of Studio Z Development. Denzer said he was impressed by the dancers and the color.

Shen Yun‘s mission is to restore China’s authentic five millennia culture which was teetering on the brink of extinction under the influence of the Chinese Communist regime.

“A great series of stories,” said Denzer, adding that the program assisted with the interpretation of the stage action.

Shen Yun’s stories are mini-dramas with heavenly beings or heroic figures who embody great virtues. They teach moral values which are still relevant even today. By contrast, folk dances take the audience from the heights of Tibet to the plains of Mongolia.

While the dancers depict cherished stories from China’s past there are also pieces that portray modern-day China. One of those is the persecution of the spiritual group Falun Gong by the communist regime. Falun Gong is a peaceful practice whose adherents practice truthfulness, compassion, and tolerance in order to become better people.

In “The Display of Great Compassion,” the dancers portray the struggle between good and evil in the modern world. Despite 20 years of persecution, Falun Gong practitioners were holding strong to their faith.

There was depth in the display and presentation of Shen Yun. The orchestra was wonderful and it supported the dancers, he said.

Shen Yun’s orchestra combines Western classical instruments with traditional Chinese instruments producing a sound that is unique in the world of music.

Michael and Barbara Grossman and their grandchildren were also in the audience that night. Michael is a medical doctor and his wife, Barbara, is a psychotherapist. They are both ballroom dancers and authors.

Michael was very moved by Shen Yun, repeating often how uplifted he felt.

“I had some very beautiful moments and points. Some of it was spiritual—very inspiring,” he said.

Michael admired the way Shen Yun created a very clear distinction between the male and female dancers, each with distinct roles and costumes.

“So, it’s very traditional—I like that. And they mix the traditional and the modern very nicely, both in the music and in the dance,” he said. He was also mesmerized by Shen Yun’s technological innovation which creates a seamless interaction between projection and the players on the stage.

“I’ve never seen that. That movement, from being on the stage live and you jump into the movie and then you come back from the movie onto the stage—that was just absolutely breathtaking,” Michael said. “The most moving part was the music.”

Michael was particularly impressed by the erhu, a traditional Chinese violin that he had never seen before.

“I’ve never realized that a two-string instrument could make that much beautiful music and [it] touched my heart. It was very, very lovely, inspiring, and very, very spiritually uplifting,” he said.

“[Shen Yun] was spiritual in a variety of ways—it had all kinds of layers of spirituality, and personal and [what’s going on on] earth itself now. So, it was both things together. I was very uplifted by it.”

Michael said that he would tell his friends and family that Shen Yun “expands your vision of what life can be [on] many different levels. And it’s just very uplifting to see modern dance, modern music, and the very classical ancient music come together.”

Barbara Grossman, a psychotherapist and author, had waited a long time to see Shen Yun and she was not disappointed.

“And I am moved inspired by the courage of these dancers. Very, very beautiful.”  She agreed that humanity was oppressed by atheism and evolution.