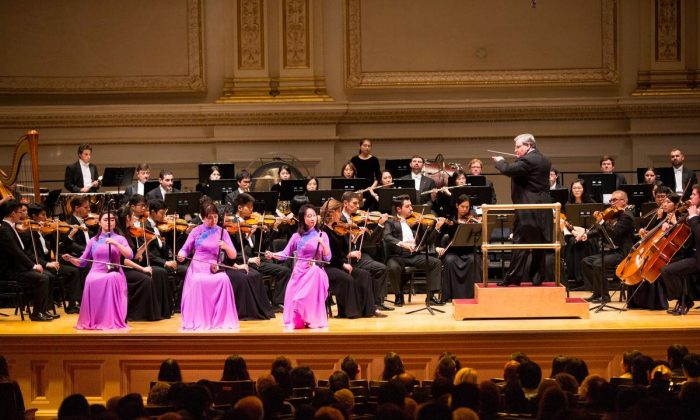 Why music harmonizes you from the inside out
By Catherine Yang

A colleague recently walked up to me rolling his shoulders. He listens to the radio. He listens to rock, pop, jazz, anything. Music is something he needs in his life, he’s said more than once. But something odd happened to him recently: He sat in front of a symphony orchestra, and all that familiar tension bunched up in his neck and back and shoulders just melted away.

“It’s amazing,” he explained, still moving his shoulders as if astounded by how easy it was to shrug off his pain and tension. He went on to tell me that a doctor friend of his had recently corroborated his theory: that music harmonizes you from the inside out, even to the point of relieving ailments.

They’re not wrong: Spotify data, psychologists, and researchers say that we have a preference for music of about 120–130 beats per minute (bpm), which is just above the average resting heart rate (60–100 bpm). This tempo tends to be found in rhythm-driven pieces with a predictable, steady beat. And this tempo isn’t even for workout tracks, which tend to run even faster. Upbeat music can encourage you to keep going when the exhaustion hits, rather than giving up.

There’s another layer to this, if we look at age-old wisdom.

The ancient Chinese, like the ancient Egyptians, like Plato, and even the illustrious patron of the arts King Louis XIV, all adhered to the universal idea that music connected man to the cosmos—that music, above all arts, could speak directly to the soul and thus should be used to the most beneficial effect. They, too, believed that music heals.

Traditional Chinese medicine has a system that looks at the five major organs, and the ancient Chinese pentatonic (five-note) scale was meant to align with these five organs. Ancient Chinese physicians wrote treatises on these relationships, and so the idea that music could “heal” by putting these systems in harmony and right alignment was meant in a literal sense.

Slowing Down With Music

We’re not always running, and we don’t always want to keep going, going, going with the ritualized busywork of the day. And sometimes even that meditation app on your phone or knowing that you only need to clear your head for 15 minutes doesn’t help you take that first step.

But music resonates with us, and live music can go straight through us, hitting us with sound waves head-on and immersing us in harmony.

One might assume that this effect is purely subjective—that the music we like most will affect us the most (or vice versa). But no, composers have long suggested that this elicited response can be intentional.

An example that sticks out for me is the classically trained composer Jing Xian. She became a professional pipa player at the young age of 15 and went on to become an award-winning composer. From there, she focused on her career and making a name for herself.

“I was quite the braggart,” she said a few years back in a mini-documentary about the music of Shen Yun Performing Arts. But her introduction to Shen Yun and to the traditional Chinese values that form the core of the dance company had her re-examining her artistic intentions.

“The ancients said the sage plays music according to heaven,” Jing explained. “That was the Chinese culture’s traditional approach.”

In light of discovering and studying this traditional culture, Jing said, “Now I’m more about what the audience truly needs.”

“Now when I write, I’m in the mindset of trying to find harmony with heaven,” she said, evoking the well-known masters like Bach, like Haydn, like Beethoven. The classical language is a rich one, with varied rhythms, harmonies, and structures built up in ways that are meant to resolve themselves before the music ends, putting us at peace.

But what makes Jing’s example truly astounding is not just her change in philosophy but also the proven popularity of this music.

The Music of Shen Yun Soothes the Soul

Shen Yun is a classical Chinese dance company, and for those who haven’t seen one of its performances, one of the (many) notable aspects is that each of its six touring companies travels with a full orchestra. All of the music is original and new every season. Shen Yun has somehow managed to combine traditional Chinese music with the classical Western symphony to beautiful effect, and you can scarcely leave a show without hearing audience members inquiring about the music, in the lobby afterward. The company ballooned in size, as did the number of performances, and then the orchestra did too.

Due to popular demand, the orchestra that had normally accompanied the various touring dance companies put on a performance of its own. Since its debut at Carnegie Hall in 2012, again, and again, Shen Yun Symphony Orchestra has been received by packed houses and standing ovations.

The ensemble combined the once nearly lost art of traditional Chinese music with the heft of Western classical music, and it’s after performances like these that audience members leave with a weight lifted off their shoulders and a spring in their steps.

The classical canon is full of examples like these. George Frideric Handel once wrote, “I should be sorry if I only entertained them; I wish to make them better.” And is there not a more recognized classical music work than his “Messiah”? A choral conductor once told me that if happiness could be bottled, it would be the sound of that “Hallelujah” chorus.

At Shen Yun’s core, the artists of the company aim to follow the principles of traditional Chinese culture: harmony between heaven, man, and earth. They aim to show this through the stories, through each movement in the dance, and through each note of the music. The Chinese character for “medicine” is literally built on the character for “music.”

Music can be used to affect many emotional states, and Shen Yun’s composers seek to soothe the psyche.

The orchestra just kicked off another global tour on Sept. 13 beginning in Asia. Every year, the orchestra visits more and new cities. On Oct. 7, it will be at Carnegie Hall in New York, before moving on to other cities in the United States.

For those living within commuting distance of a performance, check here to reserve yourself a seat. For the rest of us, maybe take a moment to close that article on the latest infuriating political debate of the hour, and tune into Classical FM for a little while.