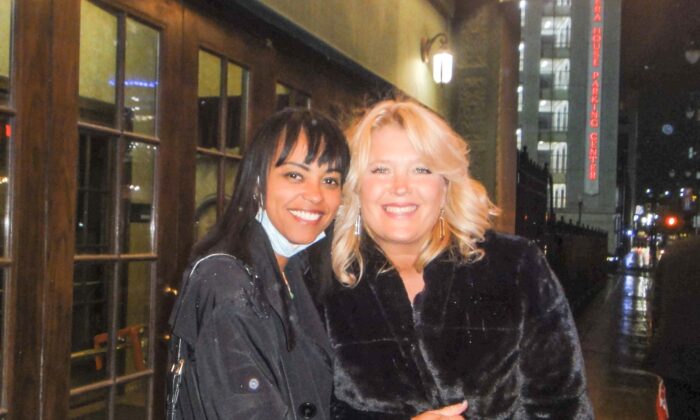 New York-based Shen Yun was fulfilling its mission of reviving China’s traditional culture by presenting a repertoire of story-based dances and music from “China before communism.”

It was not the first time that Ms. Edwards had seen Shen Yun, and every time, it has been an amazing, energizing experience, she said. Ms. Edwards is a video editor and owner of Spring Flix Media.

“I’m happy to see we’re able to bridge the gap between America and China through music and arts and dance. It’s so important because we get to see how much we really are connected,” she said.

The dances depict events from China’s five millennia history including the regime’s current persecution of the gentle spiritual practice Falun Dafa, which teaches people to live by the principles of truthfulness, compassion, and forbearance.

While Ms. Colleen enjoyed the artistry of the performance, she was deeply moved by one mini-drama portraying the persecution, abuse of human rights, and difficulties of life today in China. The message was delivered in a soft, tactful, but forthright manner, she said. She commended the company for boldly presenting the truth.

“I felt extreme compassion in that moment. And we’ve had minor restrictions in this country over the last few years …  We’ve got just a small taste. And so, I just want the Chinese people to know that everyone around the world loves them.”

“And if we knew how to help more, we would. Coming to [a performance such as Shen Yun] is one small step,” Ms. Colleen said, adding that it was a story that the world needed to hear.

Ms. Edwards was captivated by the storyline, the colors, and the costumes. She was entranced by the dance “Plum Blossom in Spring.” In this dance, plum blossoms flowering in the cold of winter demonstrate beauty and courage in the face of trying conditions.

The friends also commented on feeling energy emanating from the stage.

“So there was …  an indigo-like glow behind some of the actors. When I was watching it … I wasn’t really present. But when I allowed myself to go deeper and feel the music, I started to see the energy. I saw the energy with my eyes because it was like a glowing spirit … from the Creator,” Ms. Colleen said. It was indigo and it filled the theater, she added.

I saw the energy with my eyes because it was like a glowing spirit … from the Creator.

She sensed that Shen Yun’s music united the theater audience.

“[The energy] is so vibrant and awake. And it allows us to see more than what we already know,” Ms. Edwards said.

The friends felt that the energy was flowing throughout the performance and that it had healing power.

“There was a moment when I was watching and I forgot where I was and I giggled like a child. And it was quiet in the theater, and I was in the second row. I went “ho, ho,” because something made me feel childlike in a positive way. I felt happy, I felt joy, I felt playful. I felt no problems, no concerns of the world. I felt interconnected,” Ms. Colleen said.

“And at that moment [when] I giggled, … a woman who was in the orchestra—because I was in the second row—she and I made eye contact, and we smiled. And that was the moment when I thought, music brings us together.

“It brings us all together: music, art, and it doesn’t matter where you are in the world, it brings us together. This [performance] is very important,” she added.

Upon hearing that Shen Yun had been banned from performing in China, Ms. Edwards felt emotional.

“We need this energy to come to all cities in the world, so we can connect … and remind [each other] that we’re all one,” she said. “We’re feeling connected to another part of the world. Whether we visited there or not, we’re connected to it.”

Ms. Colleen said that, in her opinion, the energy from Shen Yun had a profound effect on the audience. She had observed happiness, politeness, and friendliness among people.

“It was much stronger during the break and after than it was before.”

In ancient China, artists were believed to be messengers from heaven—the conduit between deities and earthly beings.