Retired Congressman at Shen Yun: ‘You Feel the Beauty of God’ 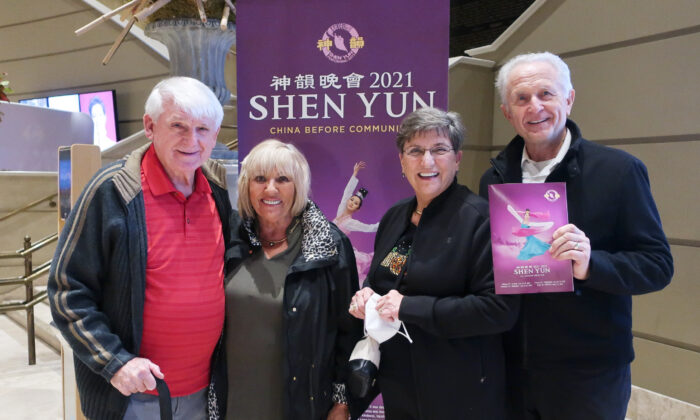 MODESTO, Calif.—Wally Herger is a retired Congressman of Northern California, the second congressional district. He and his wife Pam have seen Shen Yun Performing Arts three times in the past four years and this time, they brought their friend Faye Amos, a retired government employee.

“You feel the beauty of God,” Herger said about New York-based Shen Yun. “You just feel everything is so beautiful. They’re so well coordinated. I could watch them forever.”

Shen Yun‘s values also spoke to the retired couple. They found hope in the performance saying that they saw the message of divine creation.

“[The performance] mentioned how communism, and atheism is taking over the world. But there’s still good people,” Herger said. “There’s people like Shen Yun.”

They were able to find a connection between Shen Yun and their own faith. Herger said that he found the traditional culture in the performance resonated with him. “Boy, this just is what we believe in, what they’re saying, the same principles.”

Amos had been to China and she has seen the impact that the Chinese Communist Party has had on the Chinese people. After attending Shen Yun, she realized that “the Chinese people have had the truth about God and His nature and the eternal nature of man for 5,000 years.”

“It’s very sad to think that people aren’t allowed to believe how they want,” Amos said. “But I think that the redeeming part for Shen Yun is that it makes people feel closer to God.”

Herger agreed, saying, “The truth just jumps out at you. You feel the godliness and the truth from the beginning to the very end.”

Jolene and Roberto Villelva were also in attendance for the evening performance.

They were deeply impacted by the piece describing the persecution of Falun Gong.

“It’s unfortunate that people are continuing to be persecuted for their beliefs to this day,” Jolene said. “People should be free to practice their own beliefs.”

They were also appreciative of Shen Yun‘s effort in making the persecution known to more people. “They brought awareness to the situation. And the more people that are aware, the better the message can be put out,” she said.

At the end of the dance, the victim is saved in a miraculous turn of events. After seeing this scene, Roberto shared his belief that a “higher power can do anything.”

He also felt that the theme of Shen Yun relates to all cultures.