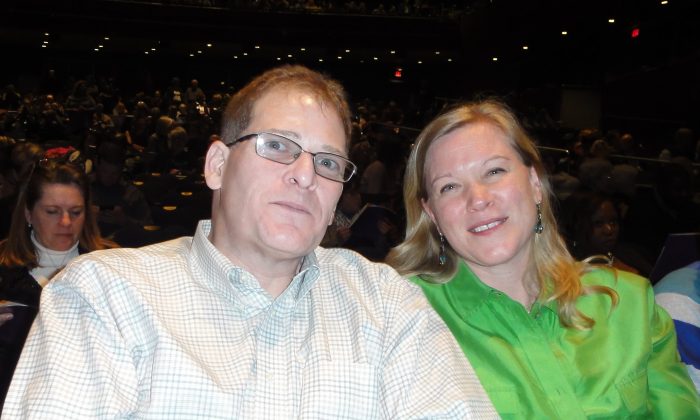 OKLAHOMA CITY, Okla.—Steve and Sarah Janco enjoyed learning about Chinese culture and history when they experienced Shen Yun Performing Arts. They were captivated by the stories and found the dancing visually pleasing.

“The costumes are very beautiful, the way they flow, the dancing—very visually pleasing,” Sarah said.

The couple saw Shen Yun at the City Civic Center Music Hall in Oklahoma City on Feb. 25. The New York-based company is in the midst of its 2019 tour and it seeks to revive 5,000 years of Chinese civilization through performing arts.

Founded in 2006, Shen Yun’s annual productions have toured hundreds of theaters around the world, with sold-out shows in New York and Philadelphia recently, as well as many other cities.

Sarah, who is a music teacher at an elementary school, praised the accompanying orchestra. She said it was a “good mix of Western and Eastern, the instruments.”

Shen Yun’s orchestra is unique in that it blends Chinese and Western musical instruments to make a harmonious sound. One of Shen Yun’s composers, Junyi Tan, said in a previous interview that the ability to bring out “the quintessence of each of these two great musical traditions, while at the same time presenting a unified theme is one of the distinct features of Shen Yun’s compositions.”

“Shen Yun’s dance revolves around classical Chinese dance and ethnic dances, and the music is tailored to the dances. As we write the music for different dance numbers, we need to fully appraise how to best echo the local traits and flavor,” Tan explained.

In terms of dance, Sarah said she enjoyed watching some of the story-based dances.

Many of Shen Yun’s stories showcase historical events, myths and legends passed down generation after generation, and modern day pieces portraying today’s real-life human rights abuses in China like the persecution of Falun Gong. And this was the piece that Sarah said touched her the most.

“For me, the persecution, that scene. That’s hard,” she said.

These stories portray” themes like spiritual devotion, the benevolence of gods, good and evil retribution, and the search for the meaning of life,” according to the company’s website. These values are foundational to traditional Chinese culture and are not political in nature. Instead, they inspire audience members to reflect on the modern world around them.

Meanwhile, Sarah’s husband, Steve, who is a real estate investor, said he enjoyed the overall experience of the performance.

“I like … the general experience of it. I do like technology, makes it more whole. The different experience, very neat,” he said.

With reporting by Sophia Zheng.