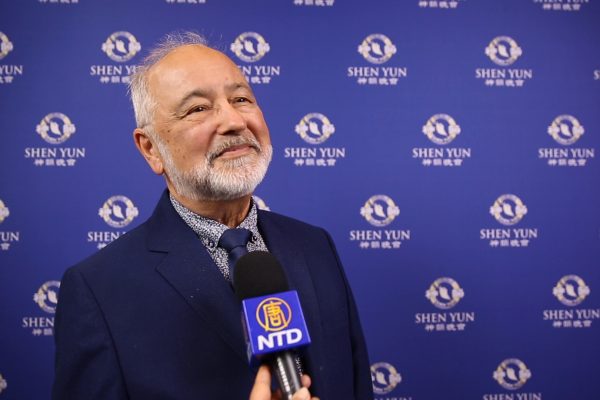 “The expression of the dancers, in their movements, really convey a lot of things, feelings and impressions, it's very, very, very well done!” said classical pianist Emmanuel Ferrer-Laloë, after attending a Shen Yun performance at the Corum of Montpellier, on March 12, 2020. (NTD Television)

That evening, among the spectators, was Emmanuel Ferrer-Laloë—a renowned Franco-Spanish pianist—who confided his joy at having been able to discover the show.

Award winner of the Toulouse and Paris Music Academies, Emmanuel Ferrer-Laloë has performed in numerous countries during his career. He has won prestigious international competitions, most notably in Barcelona, Paris, and Ourense.

An avid chamber music enthusiast, he has taught at the University of Hartford in Connecticut and has given masterclasses at the universities of Beirut and Taiwan, contributing to the training of many professional performers.

Although he now seldom performs on the music scene, Emmanuel Ferrer-Laloë continues to teach at the Basque Country Higher Music Centre Musikene in San Sebastián.

‘There is a palpable message behind it, a spiritual message’

The Franco-Spanish pianist was particularly impressed by the blending of Western instruments and traditional Chinese instruments such as the erhu or the pipa. “This is very well done,” said Ferrer-Laloë.

He also expressed his admiration for the dancers, as he highlighted the quality of their performance, their grace, and skills. “The expression of the dancers, in their movements, really express a lot of things, feelings, and impressions, it’s very, very, very well done!”

Beyond the beauty of the choreography and the technical ease of the company’s artists, Emmanuel Ferrer-Laloë was particularly sensitive to the depth of the message delivered by Shen Yun, whose aim is to revive the 5,000 years of traditional Chinese culture and to perpetuate the immutable link between art and the divine, which has long shaped the history of the Middle Kingdom.

“There is a palpable message behind it, a spiritual message. This traditional aspect is also very important. Traditions must be preserved,” says the former resident of the Sorèze Abbey.

A spiritual dimension enshrined in a “renewal” allows the viewer to escape the torments of modernity, he said. “Today, there is a welcomed reaction to the ambient materialism,” said Ferrer-Laloë.

“I believe that the aspiration of Art is precisely to convey messages, to convey peace, a transcendental vision of humanity and what it constitutes,” continues the pianist.

In order to comply with the French government’s decision to ban gatherings of more than 1,000 people due to the Covid-19 epidemic, the Shen Yun company doubled the number of performances planned at the Corum in Montpellier.

Five additional sessions were thus programmed to allow audience members who had booked tickets to attend the show they had been awaiting for months, resulting in the artists having to perform nine times within five days.

This effort made it possible to limit the number of spectators to 800 per performance and to comply with the public health measures in place. In this context, the endurance and dynamism of the company’s artists did not fail to impress the pianist.

“I find it remarkable that they were able to add shows that were not originally planned, and I think it’s great that they have the training and energy to double up because it’s obviously not easy,” said Ferrer-Laloë.

If the particularly rigorous training of Shen Yun artists allows them to carry out flips one after another and perform enchanting extensions, they also draw their inspiration from the practice of Falun Gong, a traditional Chinese cultivation discipline for the body and the mind aimed at raising one’s moral character.

Focused on Truthfulness, Compassion, and Tolerance, the practice of Falun Gong grants Shen Yun performers harmony and a unique strength enabling them to sublimate the danced scenes on stages all over the world.

Enthralled by the show and the values carried by the company’s artists, the concert performer is full of praise when recommending Shen Yun: “It’s wonderful! It’s magical and extraordinary, with a lot of precision, a lot of finesse.”