'There is a spark of divinity.' 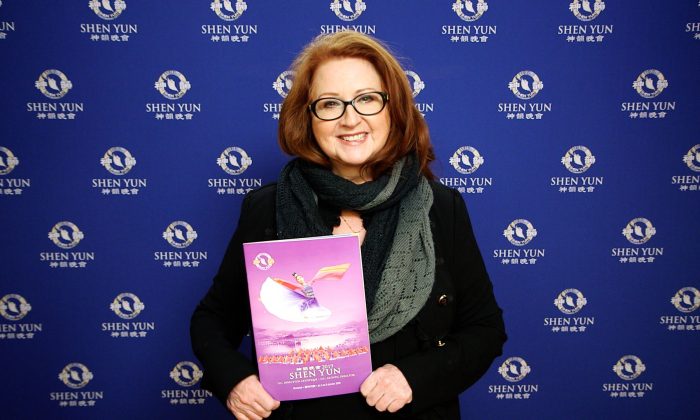 She said the performance was moving and that the dancing affected her.

“I have shivers everywhere, from the dancers’ movements,” she said. “The dancing is excessively beautiful and overwhelming.”

“And with the music on top of it, it’s a balm for the heart. It’s really very, very beautiful. Absolutely perfectly on the note, perfect harmony.”

Jalbert was impressed by the orchestra.

“The orchestrations are extraordinary. It’s a very, very grand orchestra…I take my hat off to them, because it takes a concentration, it takes an extraordinary focus and follow the leader, and completely follow the conductor who is their ultimate guide because they don’t see artists at all.”

Jalbert said she was transfixed by the soloist who performed on the erhu, a traditional two-stringed instrument from Chinese antiquity.

“To see someone on a stage playing this instrument with only two strings…everything is there, all the magic, all the expression of the different emotions…all the colors… Then the performance of this musician is absolutely—I mean it utterly captivated me. A very great musician too.”

“It’s voices that fascinate me, but this kind of voice, there expressly for this kind of song, that too has always fascinated me…[the soprano’s voice] is very, very, very high. So when she goes up very very high..she’s really a voice-acrobat, and it’s a very particular tone of voice who is appropriate for this type of singing…a voice magnificently on the note and beautiful.”

Shen Yun vocalists perform in the traditional bel canto style, which, difficult enough on its own, is quite a challenge when singing the original compositions with Chinese lyrics.

In ancient China, people believed that harmony could help adjust internal organs and improve both the body and the soul.

Jalbert also believes that music can do this.

“I’ve been making music and singing for 45 years,” she said. “I know that music heals, especially the music we heard tonight.”

“It affects every sound, every note, every vibration, it affects one, an organ, or a disease or cells, I am very very much aware of that,” she said.

Shen Yun Performing Arts is based in New York, and has the mission of restoring traditional Chinese culture and reviving its 5,000-year history. The American arts group has faced political interference from the Communist Party in China, responsible for eradicating traditional culture in China through the Cultural Revolution and other movements. Despite political interference, Shen Yun remains steadfast in its mission.

Jalbert said she could feel a beautiful quality throughout the performance.

“It’s purity. Fluidity. The synchronism of movement that makes the movement of life also synchronized with what we do, with the sounds we make.”

Jalbert said that she and her daughter came out of the theater with a sense of great well-being and a feeling of lightness. Shen Yun roughly translates into “the beauty of divine beings dancing,” which Jalbert felt was apt.

With reporting by Dongyu Teng and Carrie Gilkison.