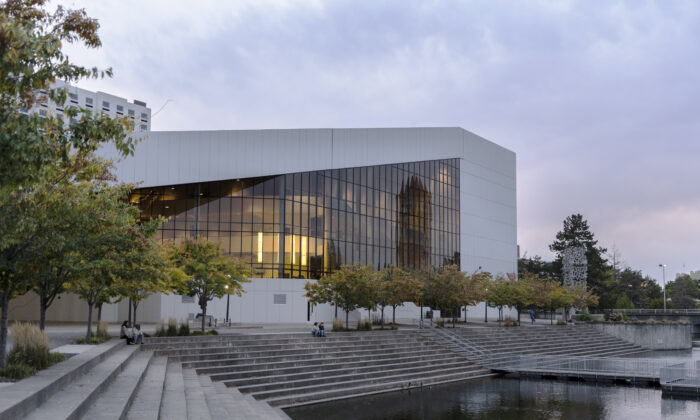 SPOKANE, Wash.—As an interior designer, Katie Getman appreciated the “true art” of Shen Yun Performing Arts as she attended a performance at the First Interstate Center for the Arts in Spokane, Washington, on Oct. 5.

With her mother, Ms. Getman bought tickets after hearing glowing reviews about New York-based Shen Yun from friends in California.

“I love the spiritual references about truth and love for each other, and respect,” Ms. Getman said.

“It just reminds me that there’s a lot that we have in common also,” she reflected on Shen Yun‘s artistic revival of traditional Chinese culture. “[V]aluing that simplicity of life, and the right to work for ourselves and have a happy life, and not be oppressed or have some of those basic things taken away from us,” Getman said.

She was also greatly impacted by the costumes in the performance. Shen Yun’s costumes are inspired by the attire found across the different dynasties and ethnic groups of China’s 5,000-year-old civilization.

“I was thinking the costumes are just stunning,” Ms. Getman said. “The way they’re designed so that the dance and the costumes accentuate each other so well … you can tell that even the weight of the fabric and everything has really been picked so carefully. It’s true art, so it’s really inspiring.”

She continued to comment that people often don’t realize how technical art can be.

A lot of times, they think it’s just creative. But really, it’s a balance of technical aspects, such as fabric and the materials you’re working with, and also display and how it’s put out.
— Katie Getman

“A lot of times, they think it’s just creative. But really, it’s a balance of technical aspects, such as fabric and the materials you’re working with, and also display and how it’s put out,” she said.

Ms. Getman also loved the dancer’s expressions. “Gosh … It really touches you. It really speaks to anyone as an individual.”

She said that the “wide range of lifestyles and walks of life” presented in stories also spoke to the diverse offerings of Shen Yun’s performance. “I really appreciate that,” she said.

But for her, Shen Yun spoke to her feelings about the true meaning of life.

“We seek what is true and good in life, and that’s what we really value and want,” she said. “And so I think that’s the meaning that’s really sticking with me tonight.”