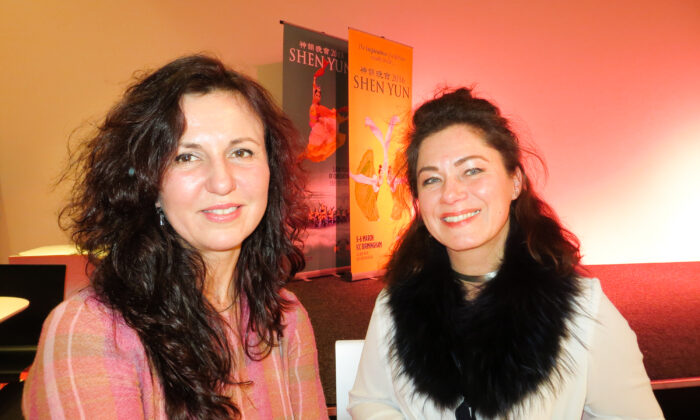 BREDA, The Netherlands—Classical art speaks truth to the human condition and great works can move us profoundly. Former dancers Anna van Herk and Elvira Lapré saw Shen Yun Performing Arts and attested to such an experience.

“Everything is just so perfect, the music, the combination, the harmony. The antiquity. You can almost breathe it,” said van Herk of the performance on Jan. 29, 2020. “My English is very poor, and yet everything was clear to me. Everything. We laughed, we had goose-bumps. It’s really incredible.”

Van Herk used to perform Russian folk dance, and Lapré danced ballet. Lapré bought the tickets as a gift for van Herk, and the pair enjoyed the New York-based Shen Yun at the Chassé Theater in Breda, The Netherlands.

Every aspect of the performance left an impression on van Herk, from the colors to the skill and talent of the artists, to the music, to the humor in the stories and the characters, a message about the value of our existence, the prominent feminine and masculine energy of the dancers on stage, and the philosophy woven throughout the culture presented in Shen Yun.

Shen Yun seeks to revive traditional Chinese culture through music and dance. It is a culture said to be divinely inspired, and for 5,000 years, the civilization revolved around the concept of harmony between heaven, earth, and humankind.

For van Herk, this culture talked about “the things that matter in life.”

It’s about things that really matter in life. Not politics and war.
— Anna van Herk

“It’s universal,” she said. “It’s about things that really matter in life. Not politics and war. It’s about being in harmony with yourself, your environment, with nature, with superior powers.”

“In harmony with the human psyche,” van Herk said. For instance, the music of the performance did just that. “It doesn’t disturb; it’s leading you. It elevates you. It takes you along.”

It speaks to what art is capable of.

Shen Yun accomplished this with impeccable artistry, and van Herk pointed out that every aspect of the production “flowed together.”

“It was built up so well, in such a way the stage was always filled with dance and there were surprises everywhere. I notice those things because I used to dance too,” she said.

With reporting by Peter Verbeek.