Dancer and Photographer See Shen Yun Every Year for a Decade 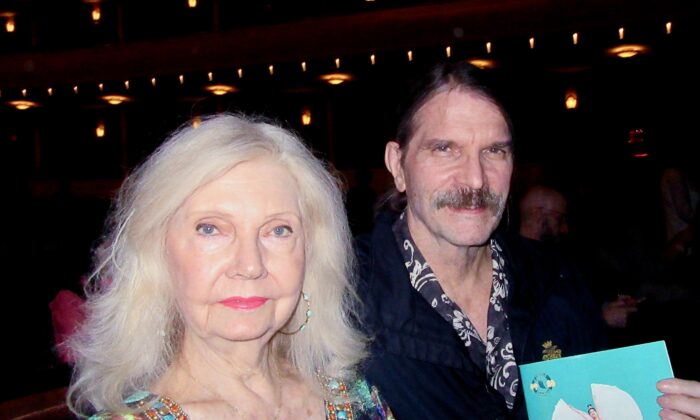 Cindy Doumani and Randy Soard enjoyed Shen Yun in Las Vegas, on Feb. 26, 2020, as they have every year since Shen Yun for a decade. (Jana Li/The Epoch Times)

“I come every year because the dancers are magnificent. They are exquisite. And also, the spirituality,” Doumani said, pausing for a moment to compose herself as the recollection of the divinely inspired performance brought her to fresh tears. “The fact that China has gone to what it has under the communist regime, but these people are still so spiritual and believe in God—I respect and admire it.”

“To me, the spirituality and the dancing and the music, that’s why we come every year,” said Doumani at The Smith Center for the Performing Art in Las Vegas on Feb. 26, 2020, opening night for Shen Yun’s five-show run.

Doumani has danced and had her own show in Japan and Las Vegas, and is the subject of the documentary “From Cowgirl to Showgirl.” The philanthropist and lover of the arts has not only seen Shen Yun every year but brought many of her friends and family, because to her, Shen Yun imparts a truly special experience.

I’ve brought my sons here and my grandchildren here. They’ve all seen the show. And we’ve brought all our friends here,” Doumani said. A few years ago, she attended a performance with 14 of her friends. “We were out of the country for a while so that’s why—Otherwise, I would have filled up this front row with my friends.”

“I’m going to call my friends from China and Tibet when I get home and tell them to try to get tickets for tomorrow night. Or Friday night, because they’ve got to see it. They would appreciate it,” she said.

In the past 10 years, Shen Yun has indeed become a global phenomenon, traveling the world with the mission to revive traditional Chinese culture through music and dance.

Ancient China went by many names, from “The Divine Land” to the “Celestial Empire,” and Shen Yun is often audience members’ first introduction to a spiritual civilization that was once nearly destroyed.

Doumani was moved to tears with Shen Yun’s portrayal, thinking about “the fact that China has gone to what it has under the communist regime, but these people are still so spiritual and believe in God.”

Soard, who has been a professional photographer for 50 years, spoke highly of both the spiritual and aesthetic facets of the program that came together to create something impactful.

“The dancers are incredible,” Soard added, saying Doumani is the dancer of the family and introduced him to the world of dance and Shen Yun.

The costumes, dancers, staging; everything was beautiful, Soard said, and sitting right in front of the orchestra, “How can you not appreciate it?”

The two were happy to bask in the beauty of the production and hoped others would do the same as Shen Yun continued its much-needed revival.

“We’re just very proud and privileged to be here, to see this,” Doumani said.

With reporting by Jana Li.