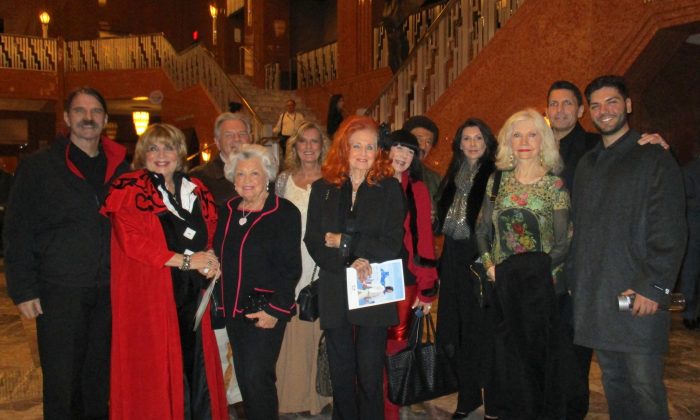 Cindy Doumani (3rd-R) and Randy Soard (L) and her group of 14 friends after a wonderful evening watching Shen Yun Performing Arts on Jan. 23 at The Smith Center for the Performing Arts. (Albert Roman/Epoch Times)

LAS VEGAS—Accompanied by 14 of her best friends, Cindy Doumani went to see Shen Yun Performing Arts for the 4th year in a row. “I love the show!” Ms. Doumani said, “I like it so well I brought all my friends; I bought 14 tickets so I could share this with them.”

“It’s so refined. The dancing and the precision, it’s absolutely beautiful!” She added, “I think it’s otherworldly and ethereal.”

Ms. Doumani is a retired Las Vegas showgirl and dancer. Currently she serves as a director for The Liberace Foundation for the Creative and Performing Arts.

Dancing was a passion for Ms. Doumani, and she knows how much work it takes to develop skill and precision.

“I appreciated the dancing so much. I was a showgirl here. I used to do flamenco and Tahitian and Arabic and Hawaiian,” she said.

“I think they have to practice every single day and I think they will. The precision is so impressive,” she added.

Each year after traveling for about six months and performing in some 20 countries and 100 cities, Shen Yun performers begin to focus on the producing an all new show for the next year’s global tour.

After watching the performances for four years, Ms. Doumani is delighted that it’s different every time.

“I see something different every time, but it was equally as beautiful. I’m very impressed.” She added: “This time I sat in the very front row, which I really enjoyed because I saw the orchestra.”

Sitting so close to the Shen Yun Orchestra and performers during Shen Yun was a new experience for Ms. Doumani.

“I could really see the drama and the emotion in their faces,” she said. “The girls are so beautiful and the male dancers are wonderful. I really appreciated it.”

Classical Chinese dance also excels at storytelling. The Shen Yun website says it best, “China’s deep cultural traditions are contained in classical Chinese dance, allowing its movements to be richly expressive, such that the personalities and feelings of characters can be portrayed with unparalleled clarity.”

“I love the storytelling. It’s very ethereal,” she mused, “I got the message that we [should] all pray for everybody in China and the world.”

Ms. Doumani clearly saw more in the evening’s storytelling, for her there was a message about freedom and human rights.

“Also the infinite mind, the power where we all came from,” she added, “I did get that message and it’s beautiful. I hope everybody can see that. I thought it was wonderful!”

“Well I’m going to come back next year when you’re here,” she said enthusiastically.”I just love (ancient) China. I love the Chinese culture.”

Ms. Doumani was already looking forward to next year’s Shen Yun Performing Arts’s tour. As the evening’s performance concluded on Jan. 23, she was making plans for 2017.

“I did bring one of my sons and my grandson. I do want to bring… I have 6 grandchildren and next year I will be here. It’s wonderful!”

‘Every One Should See It!’

Barbara Winters was a guest of Ms. Doumani’s. This was the first time she has seen Shen Yun, but it won’t be the last.

Ms. Winters has been wanting to see Shen Yun for a while, and she certainly wasn’t disappointed when Ms. Doumani gifted her with a ticket!

“I must say it is magnificent. The colors, the creativity of it and the precision, it’s a remarkable show,” Ms. Winters continued,”Everyone should see it!”

The evenings performance conveyed some important concepts to Ms. Winters.

“I picked up the need to crawl out from under oppression” she said, “To be able to speak and to have your values and your spiritual being, to have that as part of your life and not be oppressed.”

Shen Yun cannot be seen in communist China today. In July of 1999 a large scale persecution of the Falun Dafa, a meditation discipline based in Buddhist and Daoist principles, began inside China. Being an atheistic and repressive regime, the communist party fears the freedom of speech and artistic expression we enjoy in the West.

“To me, creativity is when you think, to use the quote, “outside the box.” You let your imagination soar and see things in a different light and a different dimension, and explore it and expand on it. This was remarkable in this show how much of that was done,” Ms. Winters said.

Ms. Winters would like to tell all her friends,”You must see it. You absolutely must see it. When you do you’ll understand. It was exceptional, truly an exceptional show!”

‘I Hope You Come Back Many Times’

Another friend that joined Ms. Doumani’s group was Marilyn Faye-O’Leary. Ms. Faye-O’Leary is a trained classical singer, who has performed opera, and show tunes. She has appeared on Broadway, was one of Dean Martin’s original Gold Diggers, toured with Bob Hope and is a now vocal coach.

With her wealth of experience as a performer she was very impressed by the Shen Yun ensemble.

She marveled at the group: “They’re so disciplined, they’re remarkably disciplined. The costumes were magnificent, the choreography was over the moon. It was tremendous, really.”

As a Christian Ms. Faye-O’Leary thought the concepts Shen Yun were portraying were tremendous, especially for young people.

“Let them see this, let them be exposed to something other than hard rock and rap and, you know, that kind of thing. That’s not all there is,” she said.

She closed with a message for the performers and musicians, “I wish them all well and God bless, really.”