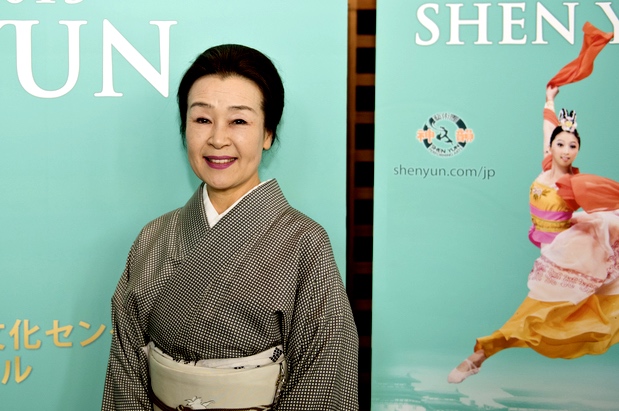 The rich expressiveness of the classical Chinese dance, which has a history of thousands of years, allows dancers to portray scenes from any time and setting, according to Shen Yun’s website. Shen Yun tells stories from ancient legends to pieces set in modern-day China, while bringing forth traditional Chinese values.

“Seeing the rich story-lines presented in Shen Yun is like reading different compelling short stories about the Chinese history,” said Tachibana Shino, a dancer from the classical Japanese dance school of Tachibana Ryu, which was established in the 1950s.

“The beauty expressed in dances shows a China that is different from the modern-day country.

One of the themes that rang a bell with Ms. Shino was goodness is rewarded and evil deed is punished. Ms. Shino commented “This is the most fundamental human morality.”

‘Touched by the Stories’

“I am deeply touched after seeing the performance since the stories have struck a chord in my heart,” said Hanayagi Jugetsuen, a teacher from the classical dance school of Hanayagi Ryu, which was established in mid-1900s. Also in attendance was her daughter Hanayagi Kyokusen.

“The animated backdrop is so refreshing to the eyes and it fuses with the dance perfectly, making it very easy to understand the storyline,” added Ms. Jugetsuen.

Shen Yun’s state-of-the-art digital backdrop changes with each program—transporting the audience from the royal courts of various dynasties, the snow-capped Himalaya, far-away monasteries to the heavens, where Chinese culture is said to originate.

The program Monkey King and The Skeleton Demon was very dear to Ms. Jugetsuen, who said “Everyone in Japan knows the novel Journey to the West. Many Japanese dances also incorporate some of the stories from the novel.”

“The way Shen Yun presented the story was full of wit and humor, something we feel quite at home,” added Ms. Jugetsuen.

“The classical (Chinese) dance in display is not something outdated. Rather,

Bringing people hope was something that Ms. Yamato took away after watching Shen Yun.