Canadian MP Says Shen Yun Is a Story of Freedom 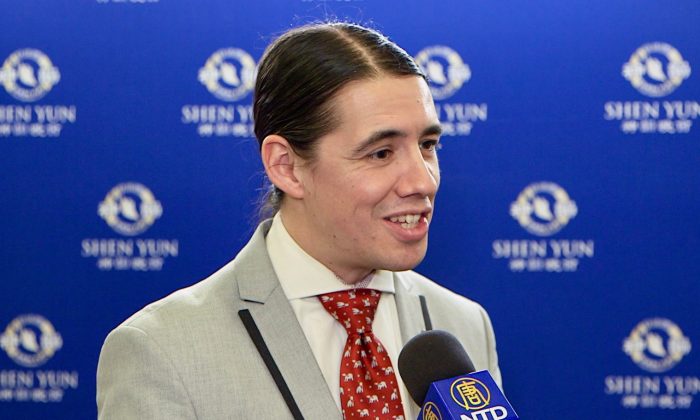 OTTAWA, Canada—MP Robert Falcon-Ouellette saw Shen Yun Performing Arts for the first time on Dec. 29 and left inspired by a message of freedom.

Through comedy and tragedy, from stories about love, to a vignette about a monk with special powers, to the modern day trials of religious persecution in China, Falcon-Ouellette saw a testament to human ideals.

“It was a story, for me, about the ideals of freedom,” Falcon-Ouellette said at the National Arts Centre in Ottawa, Canada. “I have to say that there was something that was quite moving.”

New York-based Shen Yun was formed in 2006 by artists who sought to revive 5,000 years of Chinese civilization. The traditional Chinese culture was a very spiritual one, steeped in values that come from Buddhism, Taoism, and Confucianism—in stark contrast to the communist regime that came to power in 1949 and sought to eradicate such traditions and beliefs.

So Shen Yun, which cannot perform in China, uses traditional arts like classical Chinese dance and ancient Chinese instruments along with a Western classical orchestra in order to tell stories and show scenes from Chinese myths, legends, and history up to the present day.

Falcon-Ouellette saw these themes about the ideals of freedom most literally in a story set in the modern day, which touched on the religious persecution that happens in China today under the communist regime.

“It was very moving, very upsetting, and we know that it’s going on right now even as we speak. Yet people continue to do this to other human beings, and it calls to question our own humanity, and what it means to be a human being, and our connection to spirituality,” he said.

Spirituality, he said, is a “very important component to human existence.” When totalitarian states oppress such freedoms, they “oppress what it means to be a human being,” he said. “Without spirituality, what are we? What makes us human beings?”

But Shen Yun ultimately showed a positive side and outcome for humanity.

All 5,000 years he saw—from the curtain rising on the creation of the China, the Celestial Empire, to the present day in the finale—showed freedom.

“And the idea of hope, also,” he added. “The ideas surrounding freedom, to be able to live your life as you see fit, to be free from oppression.”

“Obviously, these stories go beyond just one group or one culture,” he said.

And these stories and themes came across so vividly because of the skill of the performers.

“You can see the fun that the people were having on the stage while they were performing as well. And the musicians were fantastic.”

The East-West orchestra playing live in the pit was a treat, as were the bel canto soloists who sang original compositions in Chinese, with translated lyrics projected on the backdrop behind them.

“That was done with a very powerful message that they were trying to get across. I thought it was extremely well performed,” he said. “You could feel the emotion. You could shed a tear, what she was talking about: The ideals of freedom.”

To Shen Yun, he wished: “Keep living your ideals to the fullest.”