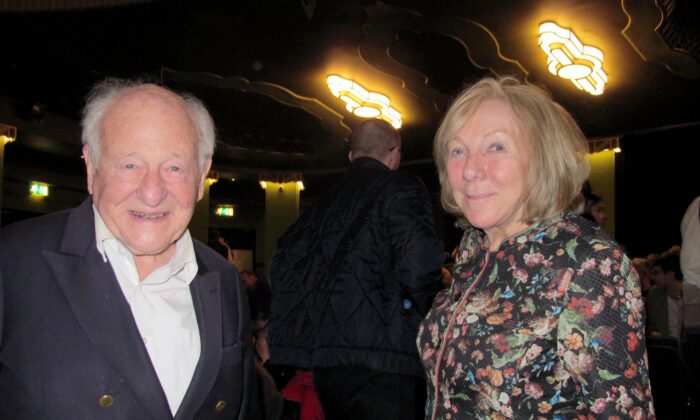 The Viscount Bridgeman with his wife Harriet, at the Shen Yun Performing Arts performance at the Eventim Apollo, in London, on March 3, 2022. (Mary Mann/The Epoch Times)

LONDON, U.K.—Shen Yun Performing Arts’ portrayal of China’s 5,000-year civilization has won praise from some members of Britain’s House of Lords. Robin Bridgeman, the 3rd Viscount Bridgeman, and his wife Harriet were at the March 3 performance.

“Marvelous dancing, but a mixture with all the sadness of present-day communist China. But unbelievably good,” Viscount Bridgeman said.

Shen Yun is a New York-based classical Chinese dance company that has the mission to revive traditional Chinese culture and share it with the world through the universal languages of music and dance.

Viscount Bridgeman, currently a Conservative member of the House of Lords, also said he could see “so many shared beliefs” between the spiritual traditions of East and West.

His wife Harriet, an author and editor, and founder of the Bridgeman Art Library described Shen Yun’s digital backdrops as “very sophisticated” and “very clever.”

“I think it’s wonderful, opening my eyes to the wonderful, wonderful traditions,” she said.

‘The Storytelling is Lovely’

“I think their kindness and their enthusiasm and the meditation and the spirit seems to shine through,” she said.

Baroness Altmann, a leading pensions expert and political campaigner, said: “I think it’s fantastic. I love the dancing, I love the colors—the colors are absolutely beautiful. The storytelling is lovely.”

China’s rich history has been under attack by the communist regime, which has systematically destroyed, distorted, and supplanted the traditional culture with its own.

Shen Yun artists are reviving China’s traditional culture but are not able to perform in China.

“It’s really sad that China is not taking advantage of its fantastic historical culture and the beauty of the art and the dance and the music that is part of its history,” she said.

Baroness Altmann appreciated Shen Yun’s efforts. “And I congratulate all the cast on all the work they’re doing,” she said.

Reporting by NTD and Mary Mann.