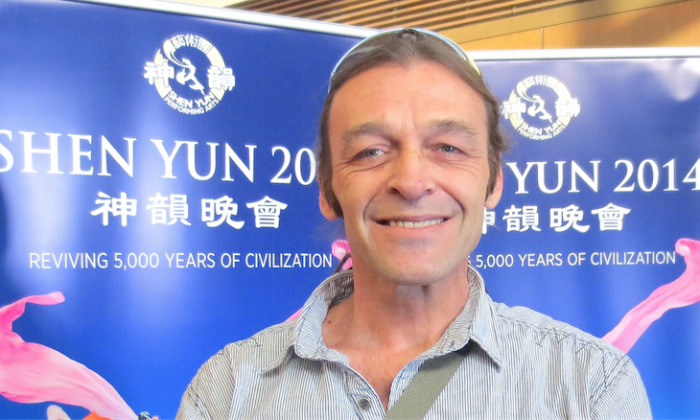 The Adelaide Festival Theatre was alive with energy for Shen Yun Performing Arts International Company’s matinee, the first of four performances over the Easter long weekend.

He said that, from an artist’s view, he saw, “The grace, the splendor, and the costumes, and just everything were really graceful.”

Mr. Woolford was impressed by the state-of-the-arts backdrop in Shen Yun, and thought it would inspire him.

“I was amazed and I couldn’t think of a better way to do it with the screen and how they come from heaven and then jump. That was amazing, I’ve never seen anything like that. Very clever.”

“For sure, I will probably go home tonight and draw something. I do mandalas, I do like you have the big back drop, big mandala shining and everything coming from heaven. I do fine mandala design, so it just comes out and I just draw what I draw.”

Shen Yun’s website explains that audiences can feel there is something different about Shen Yun.

The performers’ source of inspiration, rooted in traditional Chinese culture, is the spiritual discipline known as Falun Dafa.

“I knew about Falun Dafa and I knew about the oppression in China. Seeing this show I suppose you would see a lot more than you would normally, because as we know you can’t see things like that in China. So that was really good that way.”

“I don’t see why they are persecuted. Because they’re like Buddhist in action, so they’re the same as Buddhism, it’s all about love and compassion.”

“I came out with a big smile on my face and I’m quite excited. If they come back next year I will come and see them.”

“We are all human and we should all embrace each other as humans, and we’re all creatures of the earth.”

“In my mind everything comes from Chinese culture, so medicine, meditation, everything, everything really comes from China … So if you want to learn you have look back in time and look at the old cultures and of course China is the king of culture,” said Mr. Woolford.