Actress: Shen Yun is ‘Absolutely the Best Thing That We Could Have Had’ 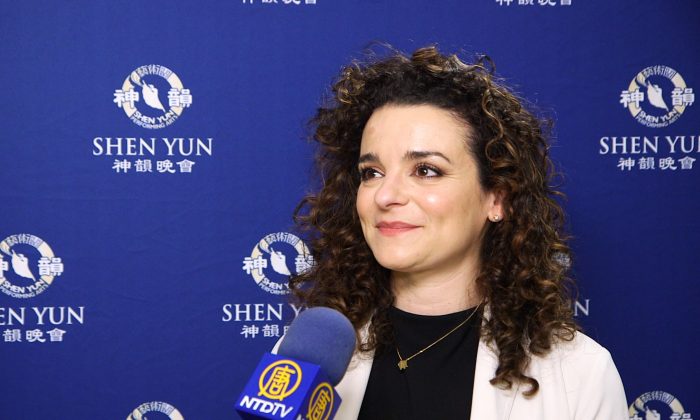 VANCOUVER—Shen Yun Performing Arts tours the world with the aim to bring back China’s genuine culture and traditional values to the modern world. This mission has earned praise from countless theater-goers, who felt inspired upon seeing the performance—just like its Vancouver audiences.

“The show is so filled with light. It’s exactly what this city needed. We needed to hear this story. We needed to see the dancing. We needed to feel it in our bones. It’s absolutely the best thing that we could have had,” said Flora Karas, who saw the performance at the Queen Elizabeth Theatre on March 28.

Karas, a Vancouver-based actress and a business owner, found the similarities between ancient China and other ancient civilizations quite intriguing, especially in terms of their belief in the divine.

“There is just the one truth that there is a veil over this world and that if you just breathe and look hard enough, heaven is right here,” she said. “I think that’s the message [from the performance.]”

China was once known as Shen Zhou or the Divine Land, a term that describes a land where deities and mortals once coexisted, and a belief that the divine transmitted a rich culture to the people of the earth.

Traditional Chinese culture was imbued with virtues and values that stem from the ancient Chinese’s belief in Buddhism, Taoism, Confucianism, and other spiritual practices. Concepts such as “respect the heavens to know one’s destiny,” and “man and nature must be in balance” are examples of principles the ancient people lived by.

Along with getting her soul enriched by the performance, Karas was amazed by the artistry of the performers from their overall togetherness down to the expressions that come across through their movements.

“It’s impeccable,” Karas said. “The dancers are so in sync. It seemed like one being up there. It’s absolutely perfect.”

She also applauded the dancers for their ability to express complex emotions through their movements in story-based dances.

According to the Shen Yun website, the dance movements of classical Chinese dance can bring out the inner meaning of intrinsic thoughts and feelings, reflecting the peculiarities of human nature, the standard for human conduct, moral concepts, mental state, and one’s value system.

Moreover, Shen Yun’s dancing is accompanied by a live orchestra that blends Chinese and Western musical instruments. The result of this produces a distinct yet harmonious sound, which is pleasing to the ear, just like for Karas.