‘You Don’t Want to Look Away’: Graphic Designer Marvels at Visuals in Shen Yun 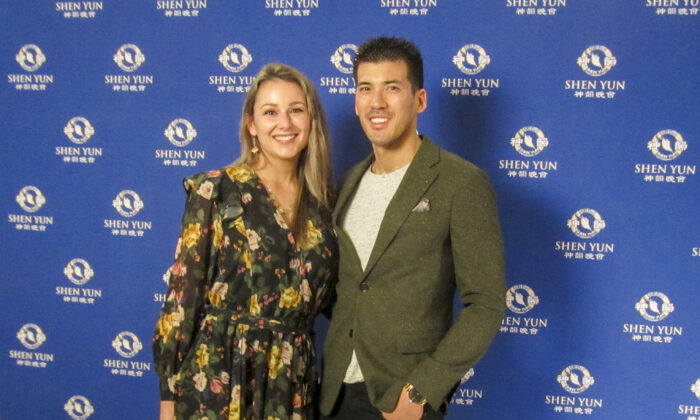 Milena Hrebacka and Yuki Yamanaka at the Shen Yun performance at the National Arts Centre in Ottawa on March 19, 2022. (NTD)

OTTAWA, Canada—As a graphic designer, Milena Hrebacka noted how much she enjoyed the many visual elements in the Shen Yun production and how they made the performance of the New York-based classical Chinese dance and music company remarkable.

“You can tell [that] the director [and] the choreographer took a lot of care to make these beautiful, engaging visuals from the dance routines,” said Ms. Hrebacka, who saw Shen Yun at the National Arts Centre on the evening of March 19.

“The use of color is very engaging as well. You don’t want to look away.”

Ms. Hrebacka, who is the owner and lead designer of a company specializing in website design, print design, and branding, said she took inspiration from Shen Yun‘s multitude of design details and the associated symbolism.

“Symbolism was very strong within the choreography and the costume design and the props,” she said.

She added that the colors in Shen Yun are “happy colors” that help to lift the spirit of audience members.

The costumes were also something to marvel at, she said.

“I could tell that there was a lot of thought and care put into the costume design, and they looked very authentic.”

Besides the visuals, Ms. Hrebacka said she was captured by the storylines in the dances.

According to the Shen Yun website, the heroes in these stories “embody the most exalted virtues of Chinese civilization, and convey morals still relevant in our day.”

Ms. Hrebacka said Shen Yun‘s storylines “were very unique” and she was intrigued by the depth of the stories.

I was very surprised by how deep the stories went and how they developed the characters.
— Milena Hrebacka

“The storytelling is really remarkable,” she said. “I was very surprised by how deep the stories went and how they developed the characters. That was very interesting to me.”

She said she takes away from the performance the importance of “being respectful and loving and kind towards humanity.”

“I was just so impressed with the physical capabilities and athleticism of all the dancers,” Mr. Yamanaka said.

He praised “their ability to put their leg right above their head and hold it there with stability and strength,” noting that he admired this in both the male and female dancers.”

Shen Yun lifts people’s spirits and it’s a performance that everyone should see, he added.

“We’re going to recommend it to everybody,” he said.

Seymour Eisenberg, owner of a company in the insurance and investment field before his retirement, brought some two dozen family members with him and his wife to see Shen Yun to celebrate their 70th wedding anniversary.

Mr. Eisenberg, who is at the ripe old age of 90, said he and his wife had previously seen Shen Yun in Florida and he wanted to take “the entire family” to see the show on the occasion of the anniversary. His family spans five generations.

“Marvellous,” said Mr. Eisenberg of the performance. “Truthfully, it was more magnificent than any play. This was special.”

He noted that the Shen Yun gives the audience “an uplifting feeling” and a message of “freedom, freedom of the spirit.”

“We need that in our world,” he said.

Among Mr. and Mrs. Eisenberg’s family members who attended the performance was their daughter Selena, a professional storyteller.

“It was a beautiful, lovely show, and all the dancers and musicians [were] incredibly talented,” Ms. Eisenberg said.

And as a storyteller, she especially enjoyed the art of storytelling in the show, combined with the expressiveness of classical Chinese dance and Shen Yun’s patented animated backdrop.

“The dancers … were so expressive in their interaction with one another that it was so interesting, because they really helped the story unfold,” Ms. Eisenberg said, and the backdrop was “seamlessly well-done” in presenting interactions between the projection on the screen and the performers on stage.

She was also “very, very captivated with the host and hostess.” In their introduction to each segment of dance or music, they “did exactly what a storyteller would do—they hooked us in, by beginning to tell the tale in a few sentences of what we would be seeing so that we could understand it.”

“I was captivated the whole time,” Ms. Eisenberg said. “It was intriguing and beautiful.”

Reporting by NTD and Donna Ho.